Liberty City in Grand Theft Auto IV, its episodes, and Grand Theft Auto: Chinatown Wars is the third rendition of Liberty City, much different from its appearance in the GTA III Era and much more closely based on New York City. The city has more detail and personality, with many more places which are based on real landmarks such as the Statue of Happiness, Star Junction and the Rotterdam Tower.

This rendition of Liberty City has versions of four of the five boroughs of New York City, plus New Jersey. Brooklyn is Broker, Queens is Dukes, Manhattan is Algonquin and Bronx is Bohan. The neighboring areas of New Jersey are represented by Alderney, which technically is separate from Liberty City. The only borough not to be recreated in the game is Staten Island.

Grand Theft Auto IV and its two episodes (The Lost and Damned and The Ballad of Gay Tony) use the same full rendition of the city. However, a small number of different locations are accessible in the different episodes. Grand Theft Auto: Chinatown Wars uses all of the city apart from Alderney and is altered for the top-down perspective of the game.

"With more sights, shows, restaurants, bars, museums, shopping and borderline psychopaths than you can shake a shotgun at, there is no place quite like Liberty City. Where else can you get sworn at by a senior citizen, accosted by a crackhead, propositioned by a prostitute, and strip-searched by a police officer, all before breakfast? Discover the history, culture and diversity that make a booming metropolis the capital of the world, at least according to the over-caffeinated locals. We encourage you to explore Liberty City's four boroughs and it's islands, each with it's own distinct atmosphere and personality. There is always something for everyone. There is also Liberty City's sister, Alderney State..."

Liberty City is divided into 65 individual and unique neighborhoods which are spread across four boroughs within Liberty City, and also part of the state of Alderney, including Alderney City.

All localities in the Greater Liberty City Area: 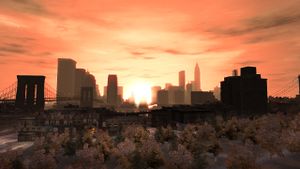 Liberty City in Grand Theft Auto IV, looking across to Algonquin from a park in Broker.

Liberty City first began when the Dutch sent out English explorer Horatio Humboldt to find a new location for them to sell Marijuana in 1609 and he sailed to the Humboldt river. The Dutch became a colony and soon Europeans traveled to city to find what freedom was truly like in the colony of New Rotterdam which promised convenience stores and public hangings as well as a slave trade craze which swept the colony ever since the very first ship load of slaves. Eventually, the English set sail for the colony, which was based on the slender island named Algonquin after an old Indian word with the same pronunciation and the settlers signed a petition to be ruled by the British. Soon the English expanded the colonies by eradicating natives and took over three new islands for the colony. The first consisted of both Broker, named after the king's bastard son who was conceived by a milk maid and the other Dukes, after the term Duky because the people smelled like excrement. Alderney was named after a man called Phillip D'Alderney, the only man who could bear living in the swampy industrial island. The smallest island was named Bohan for the Dutch word for Dutch word.

The British and the Americans fought in what was to be known as the American revolution for freedom from taxes, and after receiving a statue of a transvestite eating ice cream from the French, the Americans won and removed the Union Jack and melting the statue of King George into chains, toilet seats and gold teeth. Slavery was soon outlawed in Liberty City and women were forced to spend time under train tracks servicing men. The politicians of Liberty City moved to Washington DC when Liberty City's status as the capital of the nation was removed and given to DC. Frederick O' Fitzpatrick decided to head to the south and teach them a lesson after tensions risen and a civil war was on the horizon, but before doing so constructed Middle Park. Beyond the tranquility, people were tired of living in black and white and riots ensued, which didn't help with a civil war looming.

Liberty City at night as seen from the south.

As of 2008, the population of Liberty City is 8,363,710. The current mayor is Julio Ochoa while the Deputy Mayor is Bryce Dawkins. Thomas Stubbs III is Liberty City's congressman. The time setting is approximately in April to September 2008.

The area of the city is compressed in size (as seen with the Empire State Building's proximity to the Broker Bridge in the final shot), and the various landmarks are placed much closer to each other than in real life. The entire map is smaller than that of San Andreas, but is immensely more detailed. This makes Liberty City in GTA IV the most lifelike city to feature in any Grand Theft Auto game yet. From the massive buildings and large mass of traffic on every block of Algonquin, to residential areas of Bohan, Rockstar has successfully compromised quantity for quality, although the lack of pedestrians in normally crowded places such as Star Junction has drawn criticism.

Crime is life in Liberty City, most likely brought about by the large number of gangs in Liberty, each fighting for control of the city and will use any means possible. The Commission is an Italian-American Mafia association of all the major gangs in the city, including the Five Families are the Ancelotti Family, the Pavano Family, Gambetti Family, the Messina Family and the Lupisella Family. Towards the end of GTA IV, the Pegorino Family are trying to gain a place in The Commission. There are other major crime organizations such as the Irish, and the Triads. There are, of course, many ethnic street gangs in Liberty City as well, such as the North Holland Hustlers, the Northwood Dominican Drug Dealers, and the Spanish Lords.

This is the city where anything goes, so long as you don't get caught. There has been a crackdown on crime in recent years and the police are everywhere in the city these days. The force responsible for patrolling and maintaining order in Liberty City and Alderney is the Liberty City Police Department or LCPD.

Much of Liberty City's catering scene comprises of fast food chains and food stands/ vendors. Two of the most dominant fast food chains within the city are the Burger Shot and Cluckin' Bell franchises. Their restaurants can be found in several locations across the city. Hot Dog vendors can also be found in many locations, as well as a few hamburger vendors and mixed nuts vendors around Liberty City, particularly around Middle Park. 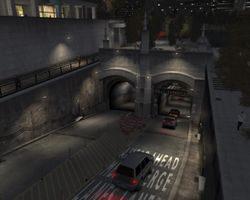 One of the entrances to the Booth Tunnel.

The main form of transport throughout Liberty City is by road, there is a prominent freeway in each borough, with two in Algonquin and another stretching from Broker to Dukes. A bridge connects each island to Algonquin, with two from Algonquin to Broker and another from Dukes to Bohan.

Helicopters can be flown either by the player or by an NPC pilot when participating in Helitours, and Liberty City has an international airport named Francis International, though the aircraft cannot be used by the player in the game. Boats can also be used to travel between the islands.

When asked why Rockstar Games decided to re-use Liberty City, Dan Houser, Vice President of the company said: "[New York City] is an environment we felt had never been done to the level we were envisioning it in a video game. From looking at all of the locations, this was the one that really stood out to us, and really had that impact. It has

"It's not the full city, it's an approximation thereof. We make a city that feels like the real thing, but is perfectly tuned for gameplay in the broadest sense. The world is not designed to be a video game. We are trying to make a video game that feels like the world, but still plays like a video game. The design of the city and the missions that unfold within it are designed hand-in-hand and complement each other perfectly. Everything in this world is here for a reason, where it is directly tied to gameplay or simply there to create atmosphere."

Grand Theft Auto: Chinatown Wars has a few differences to the Liberty City in the main console versions. This is mainly due to its top-down view, which is as a result of its design for the Nintendo DS portable platform.

Retrieved from ‘https://www.grandtheftwiki.com/index.php?title=Liberty_City_in_GTA_IV_Era&oldid=399175’
Categories:
Cookies help us deliver our services. By using our services, you agree to our use of cookies.