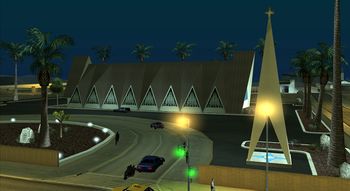 The Blackfield Chapel is a church, funeral home, and independent district in Las Venturas in Grand Theft Auto: San Andreas.

Situated on the south side of the Julius Thruway South freeway, the Blackfield Chapel may be related to the Blackfield district of Las Venturas, which is located to the northwest across the Blackfield Intersection from the building, but is declared an independent "district" by the game's map, similar to the various casinos in the city and the Last Dime Motel.

The Blackfield Chapel district is largely occupied by the compound of the chapel, which includes the chapel itself, the surrounding car park, and a driveway that serves as looping end for traffic to and from the Randolph Industrial Estate. A modernist building distinguishable by its heavy use of the triangular form, with its general structure resembling a triangular prism, the chapel is intended to mimic the real-life Guardian Angel Cathedral in Las Vegas.

West of the district is Bone County, particularly Hunter Quarry, while to the east is the Randolph Industrial Estate. North of the district are the aforementioned Blackfield Intersection, and the LVA Freight Depot, while down south, across the river, is Red County, with the most direct area being the town of Montgomery.

Retrieved from ‘https://www.grandtheftwiki.com/index.php?title=Blackfield_Chapel&oldid=347440’
Category:
Cookies help us deliver our services. By using our services, you agree to our use of cookies.