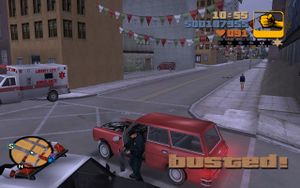 Getting busted in GTA III.

Being busted refers to a player being arrested by the Police or any other type of Law Enforcement in a Grand Theft Auto game as a result of having and failure to escape from a wanted level. At higher wanted levels law enforcement is more likely to attempt to kill the player rather than arrest them, though if given the chance they will still try to pull the player out of their vehicle.

Many things can contribute to this:

As a result of getting busted the player will lose all of their weapons, body armor and fail any mission they were currently taking part in. They will then be processed near the closest precinct. A small amount of money will also be taken by the police as a bribe, though in GTA San Andreas, if the player is dating Barbara Schternvart Carl will get to keep his weapons. In GTA Vice City Stories, a wage of $2,000 will see that the player is granted their weapons back. In the iOS and Android versions of GTA III, getting busted or wasted never removes the player's weapons, only armor and $1,000.

In Grand Theft Auto: Chinatown Wars, getting busted will cost the player any drugs which are currently held, while any in a stash box are safe.

Retrieved from ‘https://www.grandtheftwiki.com/index.php?title=Busted&oldid=418369’
Categories:
Cookies help us deliver our services. By using our services, you agree to our use of cookies.