Grand Theft Auto: Liberty City Stories, also known as GTA Liberty City Stories and abbreviated to GTA LCS, is the ninth video game in the Grand Theft Auto series, the fifth of the GTA III Era and was developed by Rockstar North and Rockstar Leeds. Capcom published and distributed the game for its Japanese release. The game was released on October 25, 2005 in North America and November 4, 2005 in the United Kingdom on the PlayStation Portable (PSP). The game, originally a PSP exclusive, was later ported to the PlayStation 2, being released on June 6, 2006 in North America and June 22, 2006 in the UK. The game has since been re-released as a downloadable game for the PSP Go on October 1, 2009. 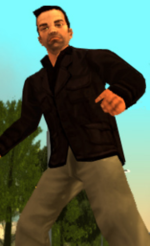 The game features the return of Grand Theft Auto III supporting character and Leone Family capo Toni Cipriani as the protagonist. The game starts with Cipriani returning to Liberty City after fours years in hiding for killing a made man. Toni, however, is disappointed to find himself back at the bottom of the Leone pecking order, working for his replacement Vincenzo Cilli. Toni later begins to work his way back up the ladder and against various people in his way, including Cilli, his mother, other mobsters and families, hitmen and politicians.

The game returns the player to the crime ridden streets of Liberty City but features many differences from previous renditions of the city. The city features new areas to explore, such as Fort Staunton, new gangs, new residents and new means of transportation, including a ferry service from Portland to Staunton Island. Motorcycles also make their first and only appearance in the city. Other changes include the Porter Tunnel and Callahan Bridge being partially completed, with the later being completed as the game progresses. 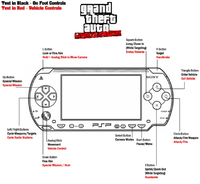 An example of multiplayer options menu of GTA Liberty City Stories in the psp version.

When the option Custom Tracks is not enabled, appear not available..

A special feature (only in the PSP version of the game) is the ability to listen to custom soundtracks. Previously, only Grand Theft Auto games on the Xbox and PC were able to implement custom soundtracks. When GTA Liberty City Stories was released, the custom soundtracks option was featured in the "Audio" section of the menu (by pressing Start in gameplay) but did not have any use. Many people posted on various internet forums asking how to use the feature. At one time, it was thought that these custom soundtrack abilities had to be unlocked, but this would have been very unusual since previous games didn't do this.

Retrieved from ‘https://www.grandtheftwiki.com/index.php?title=Grand_Theft_Auto:_Liberty_City_Stories&oldid=351581’
Categories:
Cookies help us deliver our services. By using our services, you agree to our use of cookies.