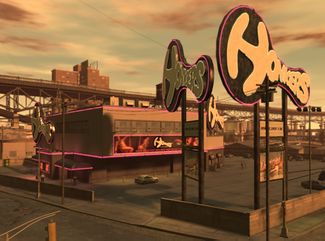 Honkers is a strip club located in Tudor, Alderney, on the corner of Tinderbox Ave. and Julin Ave.

Honkers was owned by Pegorino boss, Jimmy Pegorino, and operated by Pegorino associate Phil Bell. Honkers, as well as The Triangle Club, is a place for an activity that can be done with any of the player's friends. Some of the girls in the game also like going to the strip clubs. Honkers is significantly smaller than the Triangle Club. The barman is a guy named Tommy.

The club bears a resemblance to Satin Dolls, a strip club located in Lodi, New Jersey, which was featured in The Sopranos as The Bada Bing! strip club. The name bears similarity to the Hooters restaurant chain. The logo itself bears a significant resemblance to the "Honker Burger" logo from the "Doug" cartoon, as noted here. After Jimmy Pegorino is killed, the bar remains open, and it is not said who is the owner of it after Pegorino's death.

Retrieved from ‘https://www.grandtheftwiki.com/index.php?title=Honkers_Gentlemen%27s_Club&oldid=402574’
Categories:
Cookies help us deliver our services. By using our services, you agree to our use of cookies.