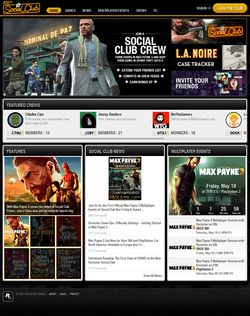 The homepage of the Rockstar Games Social Club as of May 2012. 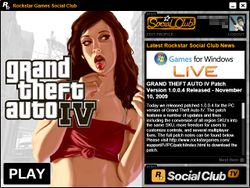 The Rockstar Games Social Club launcher for GTA IV, which provides a link to the Social Club website, as well as basic information. This launcher remained in use until the 1.0.6.0 update. 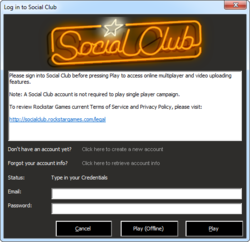 A simplified Rockstar Games Social Club launcher for EFLC, which also replaced the previous launcher for GTA IV after the 1.0.6.0 update.

The Rockstar Games Social Club (often simply referred to as the Social Club) is a website that players can use to connect their Rockstar Games releases with the Internet for the purposes of viewing stats, using new features or unlocking new game content. Currently, ten games are supported on the website:

The website has limited access to those who do not register their games. Once registered, users can see their stats synced with the website and can enter contests only available to those who registered.

Users could pre-register on April 17, 2008 to receive exclusive contents on the website. The website was launched in conjunction with the release of the console versions of Grand Theft Auto IV on April 29, 2008.

Originally, GTA IV's PC release required the player to install a proprietary Social Club launcher alongside GTA IV; the feature drew flak early after the PC version's release as the program adds to the cumbersomeness of the execution of the game, which is also attached to Games for Windows LIVE. In April 2010, the 1.0.6.0 patch for GTA IV, released in conjunction with the PC versions of The Lost and Damned and The Ballad of Gay Tony, significantly tones down the dependency for a launcher by uninstalling the original launcher and replacing it with a simpler version attached directly to the game.

"Check out the spread of 'virus' all across the world."

Launched on October 24, 2008, this section shows a map of the world on how many local players are infected by a "zombie virus".

The "virus" in question is actually the act of killing of a Rockstar staff in multiplayer or the association with a normal player who has killed a Rockstar staff; any player who has killed the aforementioned people will be "infected", thereby gaining a male zombie avatar dressed in nothing but a yellow Rockstar speedo and sandals. Because of the requirement to play multiplayer in order to be infected, not all GTA IV players will be represented on the map.

"Compete with your friend in a variety of physical challenges."

This section lists a number of otherwise typical tasks that can be completed in the game. They include:

After completing a portion of the aforementioned objectives, players will also receive "bronze" and "silver" certificates before attaining the ultimate "gold" certificate upon reaching the final goal. The certificates can be printed onto paper.

"Come count your money with the rest of Liberty City's elite."

Launched on July 30, 2008, this section records the most amount of money that the player earned. A list is provided on people who reached $1,000,000 that can be ordered by the time taken to reach it, the date on which it was reached, or by total earned. Only those who reached the $1,000,000 mark can view this section.

The list is accompanied by a short guide on how to make money in the game, as well as being backed by custom US$69 banknotes featuring Lola Del Rio on the observe and Niko Bellic firing a pistol on the reverse, and a "Money Maker" magazine featuring Brucie Kibbutz on the cover. The list, guide, banknotes and magazine can be moved around.

"You've completed the story, now what? Come inside."'

This section lists and ranks all players who have completed the main storyline. It can be ordered by time taken or date completed.

The list, illustrated within a pocket book, is backed by an interactive tabletop scattered with various items, memorabilia and photographs from the game that can be moved about using the mouse (the book itself can also be moved around). Only those who completed the story can view this section.

This section lists the top 10 players who have achieve the listed categories above in a short amount of time without cheats. The categories include:

In addition to top 10 listings, users can view their own "Trophy Shelf", which contains trophies of their achievements, complete with the position they have attained as they are included into a list.

"An elite club of players who have completed 100% of the game."

This section tracks and lists crime reports in single player by players worldwide. The reports include:

An interactive police officer will utter random things on his police radio when the mouse cursor is hovered over him. Many of these scripts are also used by police officers in game who are on a radio.

This section shows the player's game statistics, and allows them to be compared with his/her friends.

Launched on May 1, 2009, Mr. Wong's Laundromat is an online Flash game available to any registered Social Club users, even those who do not have GTA Chinatown Wars. It involves collecting dropped valuables from peoples laundry. Players can earn money and multiplayer clothing from the website and transfer them to their linked game.

Upon completion of the final story mission, two Lions of Fo are randomly placed in the game. When these are found, this section of the site allows the player to unlock Xin Shan's missions.

Launched on May 1, 2009, this section shows how many Rampages the player have done, how many yet to uncover, and exactly where they are. Upon the release of the PSP version of the game, this section of the site was replaced with the Guide Map, which also shows Unique Stunt Jumps, Drug Dealers and Security Cameras. After finding all 100 cameras, the player uses the Guide Map to unlock the extra drug dealer Sean.

This section contains downloads, which includes ringtones, wallpapers, and papercrafts. The page itself can only be accessed by registered Social Club users but the download links can be accessed by anyone.

This section is exclusive to those who pre-ordered GTA Chinatown Wars for the DS through select retailers, allowing them to unlock special bonuses like the bulletproof Infernus. This section was removed soon after the release of the PSP version of the game.

Launched in conjunction with the PSP version, Sum Yung Gai's Peking Duck Hunt is an online Flash game that involves creating pancakes. You can earn money and unlock the bulletproof Patriot for your game, in the same vein as Mr Wong's Laundromat. The name is likely a reference to the NES game Duck Hunt.

Being a member of the Social Club grants players free access to the Assault SMG, Elegy RH8 and John Marston GTA Online parent in Grand Theft Auto V. The Social Club website also includes a 100% completion checklist (with a map of collectables) and a gallery of photos taken ingame via Snapmatic.

Social Club TV is a video hosting website that can be accessed by anyone. It was launched in conjunction with the release of the PC version of GTA IV on December 2, 2008. Only those who have the PC version and are logged into the Social Club can upload in-game footage recorded through the Video Editor.

Retrieved from ‘https://www.grandtheftwiki.com/index.php?title=Social_Club&oldid=402328’
Category:
Cookies help us deliver our services. By using our services, you agree to our use of cookies.