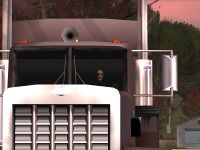 Leatherface is one of several myths in Grand Theft Auto: San Andreas. Leatherface is the antagonist of The Texas Chainsaw Massacre films. The film's character (played by Gunnar Hansen) wore a mask fashioned from the skin of his victims, giving him his name. Surprisingly, these rumors still persist despite the fact that Leatherface does not exist in the game.

There are claims of a Leatherface-esque character roaming the San Andreas countryside, like the Back o Beyond, which is also the purported location of another popular myth Bigfoot, and Palomino Creek areas. Many people have pictures and videos, mostly blurry and of low quality, claiming to have recorded the creature. People have been duped to believe the existence of this creature, wasting them countless hours for searching something that does not exist in the game.

There are mods for the PC version of GTA San Andreas that will make Leatherface appear.