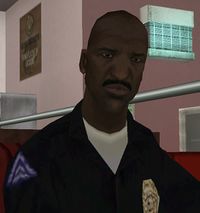 Antagonists, or simply enemies, are the main villains of the Grand Theft Auto games. The antagonist of a Grand Theft Auto game is usually a person that has betrayed or hurt the protagonist on a personal and social level, and spends the game moving against the protagonist in multiple ways. In this list the main antagonist is listed first for each game.

Description of most antagonists

In the Grand Theft Auto games, the main antagonist is introduced at the very beginning of the game (an exception is James Pegorino, who was introduced late in the game), but as a ally or friend. Sometimes, the antagonist is the main reason that a protagonist visits the city/state. In most GTA games with antagonists, they usually fake a friendship or business relationship with the protagonist then suddenly, in one mission, reveal their hate for or double cross the main character and begin to open fire on them with a weapon. The main character always hunts down and eliminates the antagonist eventually, usually in some big event at the end of the game.

Antagonists usually have a gang behind them for protection. The main character will battle the antagonist group and sometimes take them over. It is in the GTA games nature that the main antagonist is killed at the end of the game by the protagonist.

Retrieved from ‘https://www.grandtheftwiki.com/index.php?title=Antagonist&oldid=418514’
Categories:
Cookies help us deliver our services. By using our services, you agree to our use of cookies.