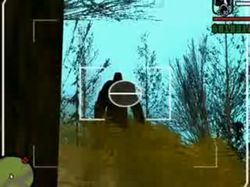 Bigfoot (or Sasquatch) is a mythical ape-like creature claimed to have been spotted around North America, and similar creatures in other locations around the world, such as the Yeti. The existence of Bigfoot in Grand Theft Auto: San Andreas has been the center of many Internet-based rumors since the game was released. It is impossible to locate where the idea originated, although one theory suggests that this is due to mention of the artist Bigfoot in the brochure that came with the game. Surprisingly, these rumors still persists despite the fact that Bigfoot does not exist in the game.

The idea of Bigfoot's existence fits nicely into the diverse world of the San Andreas countryside, especially in the Flint County and Whetstone areas, with large virgin forests and "spooky" locations, where sightings are reported most frequently. Several screenshots and videos, often blurry and of low quality (mirroring real-life supposed "footage" of the creature), have been posted claiming to show the creature in the game. Sometimes genuine in-game captures of unofficial modifications or doctored images and videos can fool the viewer.

In an official interview with Terry Donovan released in 2005, he stated, "There is no Bigfoot, just like in real life."[1] However, there is a small but vocal group of supporters of the creature's existence.

Due to the big rave about "something in the woods around Mount Chiliad", people started developing mods that made Bigfoot appear there. There are several mods creating and spawning Bigfoot, including one successful non-English mod. The mod made the player start with a load of weapons to choose from and a fully unlocked map. The player then had to go to a farmer who gave them a mission. The mission was simple: kill Bigfoot. The mod also included yetis which roamed in north San Andreas.

Shortly after the CLEO version 3 releases, another mod was made with the same models. This one didn't make the player's save files incompatible and gave them the freedom to kill Bigfoot at any time without doing a mission. There is also a mod for the player to look like Bigfoot.

Retrieved from ‘https://www.grandtheftwiki.com/index.php?title=Bigfoot&oldid=395833’
Categories:
Cookies help us deliver our services. By using our services, you agree to our use of cookies.