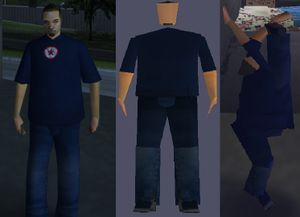 Three different variations of Novy. From left to right: Novy appearing in-game with use of the PS2 model, Novy in the skins directory using PC model, and Novy in-game with the glitched PC model.

Novy is an unused pedestrian model in Grand Theft Auto III. His model and texture is in the games files but unused, similar to Darkel. Novy's description is a white male with a brown hair and a brown tuft. He also wears blue pants as well as a blue shirt with a white and red star printed on it. Novy is playable only through the use of modifications on the PC. Novy can only be played with the model from the PS2 version as the PC version is glitched. If the PC model is used, the game will crash when the player attempts to control it. The name may be based on Tom Novy, who composed some of the songs on Head Radio (Tom Novy also played a song called "Back to the Streets", but it was deleted out of the track with no explanation). There is a misconception among some fans that he was meant to be the original protagonist of the game, though there is no evidence to back that up.