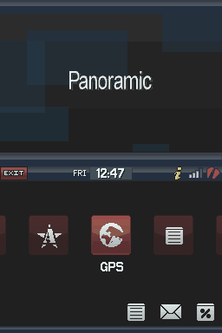 The home screen and main menu of the PDA in Grand Theft Auto: Chinatown Wars.

The Personal Digital Assistant, better known as the PDA, is a portable communication device first introduced in Grand Theft Auto: Chinatown Wars as an alternative to the mobile phone.

As opposed to verbal communication, the player may use the device to communicate via e-mail with in-game characters, order weapons on the Internet (from the Ammu-Nation website), set GPS waypoints, change radio stations and trade information in drug dealing. During gameplay in the Nintendo DS version, the PDA shows the information that would have been shown on the HUD in previous games. There is a difference of the PDA on both versions of the game, that in DS, the PDA is located at the touch screen and the PSP, the PDA is a pause menu where you can read your e-mail or link to other players using WLAN. The PDA runs BadgerOS. The PDA effectively replaces the HUD and the Moblie Phone as the primary way of communication in GTA Chinatown Wars and may replace the HUD and/or Mobile Phone in future GTA Games. The PDA in GTA Chinatown Wars is made by Panoramic

PDA is a reference to "Public Displays of Affection" which is commonly known as PDA.

The PDA is used in-game to communicate via "email" with in-game characters, mostly mission bosses. The emails are primarily mission related. Some emails start missions, some give the player instructions about their next mission, some tell the player to go to a particular area in order to start a mission, some talk about Huang Lee, some are drug related and the in-game characters and some give the player information, like the E-mails from Ammu-Nation that inform the player when they receive a delivered weapon.

The PDA is also capable of listing particulars of contacts, such as their name (first and last), email address, telephone number, postal address and age under the "Contacts" section.

The "GPS" functions as the map for GTA Chinatown Wars. For the DS version of GTA Chinatown Wars, the player is provided with two map views: One general view of the entire Liberty City map, and a closeup of an area of the player's choosing. It should be noted that nearby landmarks are only visible on the general map if it is in view of the closeup.

Players can "search" from a categorized list of specific landmarks in the city, mission markers, discovered collectibles, side quests, and (with the Drug Dealing side activity activated) dealers. The "search" feature displays landmarks of a type all over the general map, as well as listing their distances from the player by road (from the closest to the furthest in feet). Selecting the distance display of a landmark will automatically create a waypoint to the landmark. The player can also place a custom waypoint, and even save it into their "favorites" list.

The PDA also functions as a trading tool for the Drug Dealing side-activity. Players can:

Unlike its predecessors, GTA Chinatown Wars gives the player the ability to order weapons online via the PDA from the Ammu-Nation website.

When AmmuNation.net is unlocked after the mission "Pimp His Ride", the player can access it through the PDA (pause screen). There is a choice of six categories for weaponry: Handguns, Submachine Guns, Shotguns, Assault Rifles, Heavy Weapons and Projectiles. There is also a Miscellaneous section where the player can buy body armor.

To order weapons, the player touches the category they want and then chooses which weapon they want. Providing they have sufficient funds, the money is deducted and the weapon is put in the basket. Then, when all the weapons the player wants have been selected, touching the basket confirms the order.

After ordering weapons, the player receives 2 emails on their PDA. The first one confirms the order, and the second one tells the player that the order has been delivered to their nearest safehouse. After this email, a white "A" appears on the radar, showing the location of the delivery. At the safehouse, a box with the Ammu-Nation logo on it appears with a blue blip above it. Walk into it and all the weapons (and armor, if ordered) are instantly equipped.

Mission briefing and game statistics, which have long been a staple of the GTA series, are also accessible under the PDA interface.

The "Stats" section primarily lists all gameplay stats, ranging from mundane activities such as distance traveled, bullets fired and accuracy and criminal acts, to game achievements, such as racing time, collectibles discovered, scores in side-quests, medals for completion of missions or replays and percentage of completion. These stats can be linked and share on a multiplayer network.

The "Brief" section, as expected, lists recent mission instructions given to the player during a mission, beginning from the most recent. The list of briefs are usually wipe upon completion of a mission.

Although there is no direct indication that the PDA interface is used, the carjacking minigames interface for locked luxury cars depicts a computerized device with a keypad, hinting that the PDA is also used to hack the car immobilisers.

Retrieved from ‘https://www.grandtheftwiki.com/index.php?title=PDA&oldid=416023’
Categories:
Cookies help us deliver our services. By using our services, you agree to our use of cookies.