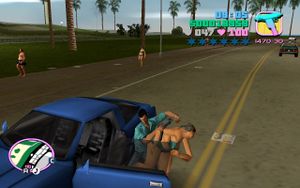 Vehicle theft, or carjacking, is a basic act available in all Grand Theft Auto games, where the player possess the ability to steal an occupied or unoccupied vehicle. It is a fundamental feature in the games, and an inspiration for the "Grand Theft Auto" name, which is a legal term for vehicle theft.

If a vehicle is unoccupied, the player may simply break in, start the engine and drive/ride/fly away. For Grand Theft Auto IV, often times the player must take the time to shatter a window of a road vehicle or helicopter if it is locked (larger vehicles and boats, however, do not have locked doors to begin with) and hotwire the vehicle before they can start the engine. If the player interrupts the carjacking by pressing any other key in Grand Theft Auto: San Andreas or GTA IV, the player character will simply open the vehicle's door but will not enter the vehicle.

For Grand Theft Auto: Chinatown Wars, the act of stealing an unoccupied car is significantly more complicated, with each car featuring any one of three different lock-cracking minigames that the player must successfully pass in order to finally assume control of the vehicle; these include forced ignition by twisting a screwdriver on the ignition lock (for low grade vehicles), hot wiring by screwing open a wire panel and twisting two wires together (for middle grade vehicles), and matching the code of an immobilizer using the PDA's hacking software (for high grade vehicles).

In certain cases, road vehicles will automatically trigger an alarm when intruded, attracting police attention. This can be averted by tripping off the alarm by hitting the vehicle with a weapon or another vehicle, waiting until the alarm stops, and then breaking into it. For GTA Chinatown Wars, a vehicle alarm will only go off if the player fails to start the car engine within an allocated time or leaves the vehicles before the car is unlocked; vehicles with immobilizers do not impose a time limit given the act of decoding the immobilizer may take considerably more time. In Grand Theft Auto 1, certain vehicles may also be armed with a bomb activated when it has been broken into, serving as a deterrence to carjacking attractive vehicles parked in the game. 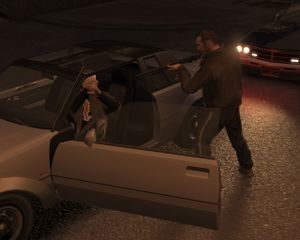 By holding a firearm when attempting to steal an occupied car in GTA IV, it is possible for the player character to enter a sequence where he holds the driver at gunpoint.

Since GTA IV, the police has the ability to commandeer other vehicles, both occupied and unoccupied, if there are no police vehicles nearby. This behavior is most commonly seen if the player is wanted by the police and stays put for foot officers to come, and then flee by car. They do not discriminate which vehicle to commandeer, and this includes vehicles the player has parked in the parking area.

Carjacking is not without its dangers. From Grand Theft Auto III onwards, certain drivers will react aggressively towards the player if their vehicle is stolen, dragging the player out, and either reenter their vehicle to drive away, or pick a fight with the player; taxi drivers and gang members are usually depicted with such behaviors.

As expected, carjacking, as is the possession of a vehicle with a triggered alarm, will attract police attention if a police officer is within the line of sight of the crime, often resulting in the player attaining a one-star wanted level. In GTA San Andreas, however, it is possible to entirely avoid police attention during a carjacking. If the player is in the process of pulling an occupant out of a vehicle and notices an officer nearby, they can just interrupt the carjacking. This is because the police officer will only respond if the player gets in the stolen vehicle; simply pulling an occupant out will not earn a wanted level.

Normally, should the player attempt to steal an occupied car belonging to a gang member, other gang members of the same gang nearby will chase the player on foot, usually using firearms such as pistols or SMGs to stop the player to retrieve their gang car back. In GTA IV, nearby gang members will also give chase in their cars, which tend to be very difficult to outrun as they act like police officers on a 6 star wanted level, attempting to box the player in and gun them down.

If the player attempts to carjack a vehicle just as it begins to move and accelerates, the player will inevitably be thrown off, emphasizing the need to carjack only when a car is traveling in low speeds or is in a complete stop, however, in GTA San Andreas, if the player enters the passenger side of the vehicle, the driver may panic and begin to drive away, but the player character may still enter normally as if the car was stopped, making for a good boost of speed after taking full control of the vehicle (especially a ZR-350 or an Infernus); likewise, any non-playable character attempting to drag the player out of their car may be met with the same experience if the player manages to bring their vehicle's speed up. In GTA IV, the proliferation of ragdoll physics allows for both the player and NPCs to be dragged along the road while clinging to a door handle after a failed attempt carjacking a vehicle which is beginning to move at a higher speed.

Retrieved from ‘https://www.grandtheftwiki.com/index.php?title=Vehicle_Theft&oldid=412820’
Categories:
Cookies help us deliver our services. By using our services, you agree to our use of cookies.