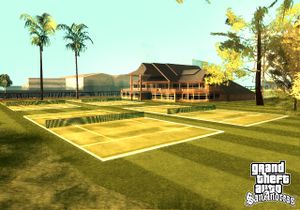 The rear of the Richman Country Club clubhouse in an early pre-release screenshot of GTA San Andreas.

The Richman Country Club is a Los Santos country club in Grand Theft Auto: San Andreas. While named after the district of Richman, the club is in fact located in neighboring Vinewood.

The club is featured on the Grand Theft Auto: San Andreas website, which describes the club as a place "Where the rich play golf together, and shower in exclusive surroundings, and pay a fortune for the privilege". This must indicate that the country club is an upscale establishment.

The club only makes a minor appearance in the games storyline; it appears as one of the shortcuts OG Loc uses to flee Carl Johnson and Madd Dogg during the mission "Cut Throat Business". Otherwise, the club has no use to the player due to the fact that the club is not interactive. The clubhouse compound encompasses a large clubhouse, four tennis courts, and a large walkway which is commonly traversed by pedestrians.

Retrieved from ‘https://www.grandtheftwiki.com/index.php?title=Richman_Country_Club&oldid=365672’
Categories:
Cookies help us deliver our services. By using our services, you agree to our use of cookies.