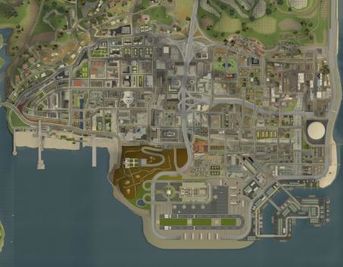 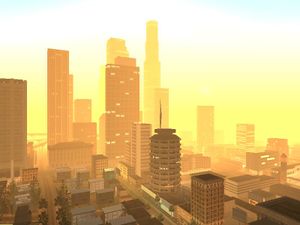 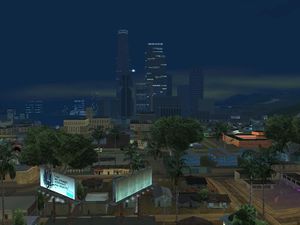 Like Los Angeles, Los Santos is a huge, sprawling co-mingling of cultures and perspectives, full of two-bit hoodlums and small-time actors. The population of over 3 million people is divided into 32 districts, which are home to movie and television studios, multi-million dollar estates, crack-ridden ghettos, and a busy international airport. Numerous roads and a central rail line connect Los Santos to San Fierro and Las Venturas. The most infamous street in the city is Grove Street, located in Ganton, southeast of downtown Los Santos, and just minutes south of East Los Santos, which contains a predominantly Hispanic population. Grove Street is home to the Families gang, a once powerful gang whose influence faded due to highly successful drug trafficking by the rival Ballas gang.

Los Santos' police are corrupt and the politicians avoid the streets like the plague. There is a motocross track, several basketball courts, and an observatory (modeled after the Griffith Observatory) to satisfy stargazers. Occasionally, independent drug dealers are seen carrying huge wads of cash from recent transactions. Graffiti is commonplace and gambling venues like the racetrack are frequented by many of the city's denizens. The suburbs nestled in the north hills (modeled after the Hollywood Hills) are home to wealthy businessmen, movie stars, and Madd Dogg, the killer rap artist, alike. The occasional shack or trailer park can also be spotted within this highly affluent district, testaments to the period prior to the gentrification of northern Los Santos.

Los Santos is the hometown of Grand Theft Auto: San Andreas protagonist Carl "CJ" Johnson, who returns from living in Liberty City for five years, after his brother informs him of their mother's death. The game starts upon Carl's arrival in Los Santos in 1992, and the story revolves around a lengthy gang war between Carl's gang, the Grove Street Families, and its fiercest rivals, the Ballas. Tensions between rival Hispanic gangs, Varrios Los Aztecas and Los Santos Vagos, also threaten the tenuous hold with which the Grove Street Families cling to their paltry territories. However, due to the betrayal of senior members Melvin "Big Smoke" Harris and Lance "Ryder" Wilson to the Ballas under the influence of corrupt C.R.A.S.H. officers Frank Tenpenny and Edward "Eddie" Pulaski, Grove Street Families leader Sean "Sweet" Johnson is arrested and Carl is run out of town by C.R.A.S.H., causing the disbandment of the Grove Street Families and the mass takeover of Los Santos by the Ballas and Vagos, with the Ballas taking all of what used to be Grove Street territory.

The city is then torn apart over the issue of drug overflow on the streets. However, the same year, Tenpenny and Pulaski, who had motivated Smoke, currenlty the town's largest drug baron, and a now dead Ryder, to betray the Families, are charged with murder and sexual assault, after their extensive corruption becomes blatantly obvious, even to the general public. However, Pulaski had already been murdered by Carl in the desert ruin area prior to those events, after he and Tenpenny, who were using Carl as their patsy, decide there is no more use for him. Alone at the court hearing, however, Tenpenny is released when the prosecutor inexplicably drops all charges. The entire city, outraged that Tenpenny walks free from horrendously heinous charges of which he is obviously guilty, erupts in riots. This is a reenactment of the L.A. Riots (also known as the Rodney King Riots) after the release of the police officers that brutally beat up Rodney King. During the ensuing chaos, Carl kills Smoke. Carl then chases after Tenpenny, who dies when his stolen Fire Truck careens off the side of the overpass over Grove Street. When news of Tenpenny's death reaches the people of Los Santos, the riots cease, and the Grove Street Families regain their spot as the strongest gang in Los Santos. 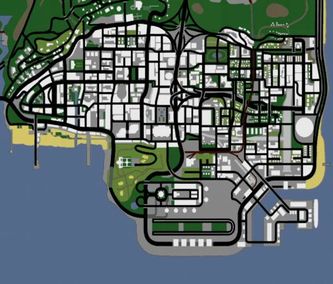 The "wealthy" side of town containing Vinewood, Rodeo and Mulholland, known around the world as the offices, studios, shopping destinations and homes of the rich and famous.

The "poor" side of the city, made up primarily of lower-class suburbs that are all subject to violent crime, marked by the Ballas-Grove Street War and the area where the Los Santos Riots started, which eventually spread to the entire Los Santos area..

The middle section of the city, containing major corporate headquarters in Downtown, civic-minded buildings around Pershing Square, and their airport.

Los Santos is the only city that has gang territories (without exploiting the Territory Glitch). There are a minimum of 53 and maximum of 57 territories in Los Santos.

There are various sports teams that play in the Los Santos area:

Retrieved from ‘https://www.grandtheftwiki.com/index.php?title=Los_Santos_in_GTA_III_Era&oldid=417810’
Categories:
Cookies help us deliver our services. By using our services, you agree to our use of cookies.