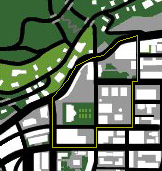 Vinewood is a affluent district in Los Santos in Grand Theft Auto: San Andreas. It is located in the north-central region of the city. The district is modelled after Hollywood in real-life Los Angeles, and also Hollywood Hills. Surrounding Vinewood are the districts of Richman, Rodeo, Mulholland, Temple, Market and Marina. Vinewood also appears in Grand Theft Auto V's rendition of Los Santos

The area is one of the most affluent parts of town, along with Richman and Rodeo. The district is home to many of Los Santos' movie stars, musicians, and models.

Typically, one can find more high-class vehicles and sports cars being driven around in this area.

Los Santos (3D Universe)
Retrieved from ‘https://www.grandtheftwiki.com/index.php?title=Vinewood_in_GTA_III_Era&oldid=379059’
Category:
Cookies help us deliver our services. By using our services, you agree to our use of cookies.