Jeffrey "OG Loc" Cross is a character in the 3D Universe who appears as a supporting character and a minor antagonist in Grand Theft Auto: San Andreas. An aspiring rapper and part-time member of the Grove Street Families, who later abandons the Families upon gaining fame, and is later discarded by them following his breakaway post the gang's resurgence, he is voiced by Jonathan "Jas" Anderson.

Loc was born in the poorer neighborhoods of Los Santos, presumably in Ganton, where he later owns a house. Loc did well at school and had planned on going to college, being encouraged to do so by friend and Grove Street Families leader Sweet, but instead decided to pursue his dream of becoming a successful rapper. He chose his present-day nickname as a future stage name, and began to commit various crimes in order to imprisoned, to boost his career by making himself appear to be a criminal. He mainly committed traffic violations and, sometime prior to 1992, was arrested by the Los Santos Police Department and sent to prison. He was imprisoned with Freddy, a member of the Los Santos Vagos, who later implies that he raped Loc, who denies it and says that he had stolen his rhymes.

In 1992 he is released from prison and met by Sweet, his friend Melvin "Big Smoke" Harris and Sweet's recently returned brother Carl "CJ" Johnson, who mock his appearance and his previous idea of attending college. Loc, however, decides to prove to himself to them and get revenge against Freddy. The four drive to Freddy's home in East Los Santos, with Carl deciding to stay with Loc. Freddy leaves his home and gets on to a motorcycle, fleeing from the angry Loc while also taunting him, saying that he no longer needed him for sex. Loc and Carl chase him down and kill him, before Carl drives Loc to his new job at the Marina branch of the fast food restaurant chain Burger Shot, given to him upon his release from prison.

Loc later discovers that his job of a "hygiene technician" is basically that of a janitor, or cleaner, at the restaurant, and reluctantly does his job, being visited by Carl on numerous occasions. On the first occasion, Loc asks Carl to steal a sound system in the back of a van, which Carl achieves. Carl again visits to find Loc rapping in the restaurants toilets, with a patron telling him that he 'sucked'. Carl suggests getting a writer to help him with lyrics and Loc asks him to steal star rapper Madd Dogg's rhyme book from his mansion, which Carl does with a bit of casualty.

Carl visits him once again and this time meets the manager, who initially fails to recognize 'Loc' but later tells him that Loc had been promoted to an appliance technician. Loc, upon meeting Carl, tells him that he has been blackballed by Alan "Scipio" Crawford, Madd Dogg's manager, and asks him to kill him after he leaves an awards ceremony in Vinewood. Carl manages to get one of the vehicles in the motorcade carrying Scipio and, after he enters the vehicle, locks the doors and drives the car into water off a pier in Verona Beach, bailing out at the last second. 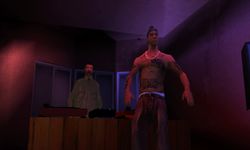 OG Loc at his house party during the mission House Party.

After Carl kills Scipio, Loc quits his job as a janitor and violates his probation, deciding to hold a house party before he is sent back to prison. Carl later attends the party and meets childhood friend Lance "Ryder" Wilson, who mock Loc's rap and lyrics. Carl, Ryder and Sweet, also in attendance, are later forced to enter Grove Street to fend off a Ballas attack and are disappointed that they missed the start of the real party, which had begun after Loc had stopped rapping.

Loc continued to perform on the underground circuit and, after the downfall of the Grove Street Families owing to betrayal on the part of Smoke and Ryder, who had joined hands with the Ballas, Smoke became rich quickly through his involvement in the drugs trade and used his money to get Loc a contract with Blastin' Fools Records. Loc, despite his squeaky voice, released his first and only album, Str8 From Tha Streetz, using Madd Dogg's rhyme book. Shortly afterwards, a clothing line, Loc-Down, referring to his time in prison, is brought out and is sold by the Victim clothing company.

Loc is also interviewed by Lazlow on his Entertaining America show on West Coast Talk Radio, where he criticizes Lazlow for mispronouncing his name. Loc is also openly supported by Smoke, who states that Loc is a real gangster while also saying that he is a philanthropist trying to stop the use of drugs in the city, so that "either way, you can feel good about yourself listening to this music!". Loc's public relations team also attempted to cover up his poor rapping voice by stating that he used "a whole new style of hip hop, fusing dancehall reggae, nursery rhymes and straight gangsta into a str8 bundle of energy and hatred".

Loc's successful rap career comes to an end when a disgraced Madd Dogg, after almost committing suicide, recovers from depression with help from Carl, not knowing of his involvement in the events leading to his depression. Carl later helps Madd Dogg locate Loc, with the two chasing him using hovercrafts around western Los Santos. They eventually chase him into the Blastin' Fools Records building, where they meet Loc's manager Jimmy Silverman who, after learning that Loc was in possession of Madd Dogg's rhyme book, threatened to sue him.

Loc is later dropped from the label and loses all support he had from Smoke, who is deemed dead in an accident following his death after a confrontation with Carl in his hideout in East Los Santos at Carl's hands. Loc, whose album was poorly received, 'disappeared without a trace' according to Big Smilky, who also states that many view him as the worst rapper in history. Loc then faded away and did not release another album. He was also discarded by the Grove Street Families due to his abandonment of the gang, and probably left for Red County to avoid gang alliances.

Retrieved from ‘https://www.grandtheftwiki.com/index.php?title=OG_Loc&oldid=418773’
Categories:
Cookies help us deliver our services. By using our services, you agree to our use of cookies.