The Anywhere City Police Department is the Police Department serving the municipality of Anywhere City. At the time of release they are represented as police force of the near future. The ACPD feature prominently throughout Grand Theft Auto 2 as minor antagonists, as well as appearing briefly in the live action movie. 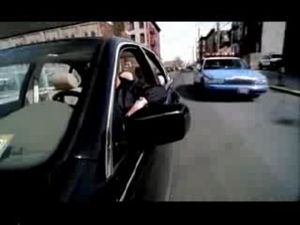 ACPD officers wear a dark blue uniform with a lighter blue tortoiseshell shaped helmet. The standard sidearm for an officer is a pistol; although an ElectroBaton stungun was present in the beta. Members of the SWAT teams wear a similar uniform albeit with body armor, a white helment and are slightly more accurate with the pistol.

Standard roadblock procedure is to block the road with cop cars and placing barriers inbetween them . Pistol armed officers would stand behind the barriers and open fire if necessary. The size of a roadblock varies on the width of a road.

The only vehicles seen used by the police are the Cop Car and SWAT Van. It is not known if the Special Agents are part of the CIA, FBI or other government agency or indeed a part of the ACPD. Cop Cars will always contain two officers armed with pistols who will both exit the vehicle and attack Claude Speed if provoked. The SWAT Van contains up to six officers armed with pistols.

In GTA 2: The Movie, the police car is depicted as a 1991-1992 Chevrolet Caprice, which bears the New York Police Department livery.

In each district sans the Industrial District a Police Headquarters can be found; normally with unlocked cop cars parked in it. The largest appears to be the Headquarters in the Downtown District which features a car impound lot with very tight security. The Residential District has a large brick building with several parked police vehicles in it but, strangely enough, no police officers ever seem to be there.

Retrieved from ‘https://www.grandtheftwiki.com/index.php?title=Anywhere_City_Police_Department&oldid=400735’
Categories:
Cookies help us deliver our services. By using our services, you agree to our use of cookies.