Anywhere City is the name of the city featured in Grand Theft Auto 2. It is presumably called this, as GTA 2 is set in the near future (the game's manual and website use the term "three weeks into the future".), and because the city doesn't bear any resemblance to any real life city in particular and is more likely based off multiple cities around the world, although the intro movie shows that it was filmed in New York City.

The city bears similarities to Liberty City in GTA III Era, as they were both directly split up into Industrial (Portland), Commercial (Staunton Island), and Residential (Shoreside Vale) districts. Anywhere City is divided into three sectors:

The Downtown District is the first district Claude finds himself in. Here are the major office buildings and high flats, as well as a university and some outdated small docks. The game begins here and Claude can start taking missions from gang leaders, who ring certain telephones around the district. In this district Claude works for the Yakuza (led by Johnny Zoo), the Loonies (led by Elmo), and The Zaibatsu Corporation (led by Trey Welsh). The maximum wanted level is 4 and therefore the highest police force encountered is the SWAT.

The Residential District is the second district Claude explores and is full of blocks of flats and shops. The police headquarters, the Alma Mater Prison, a military base, the Zaibatsu Village, the Mobile RV Park and the SRS Scientists laboratory are located in the Resident District. Here Claude works for the Scientists (led by Dr. LaBrat), the Rednecks (led by Billy Bob Bean) and The Zaibatsu Corporation (led by Red Valdez. The maximum wanted level is 5, and therefore the highest police forces encountered are the Special Agents).

The Industrial District is the third and final district Claude explores. The Industrial District mainly consists of factories, although there are also blocks of flats and a small village in the northwest, Mad Island. Mad Island is populated by a gang which always attacks Claude, regardless of Claude's respect level. Here Claude works for the Hare Krishna (led by Sunbeam), the Russian Mafia (led by Jerkov) and The Zaibatsu Corporation (led by Uno Carb). The maximum wanted level is 6, leading to an army chasing Claude. 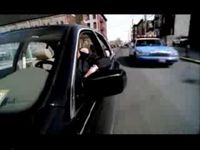 The Anywhere City Police Department is the Police Department serving the municipality of Anywhere City, USA. At the time of release they are represented as police force of the near future. The ACPD feature prominently throughout Grand Theft Auto 2 as minor antagonists, as well as appearing briefly in the live action movie. ACPD officers wear a dark blue uniform with a lighter blue tortoiseshell shaped helmet

Retrieved from ‘https://www.grandtheftwiki.com/index.php?title=Anywhere_City&oldid=388060’
Categories:
Cookies help us deliver our services. By using our services, you agree to our use of cookies.