The SWAT Team (Special Weapons and Tactics) is a law-enforcement agency in the 3D Universe, divisions of the games' respective police departments, in the Grand Theft Auto series that first appeared in Grand Theft Auto 2, and was carried over to every game up to Grand Theft Auto: Vice City Stories. In all games they are the second ones to appear once the player has reached a four-star wanted level.

SWAT is replaced by NOOSE in the HD Universe.

SWAT officers in GTA III wear a WWII style helmet with black sunglasses and turquoise coloured clothing. Their vests are blue and the helmets have "POLICE" printed on the front. SWAT Team members in GTA III wield Micro-Uzis.

SWAT officers in GTA San Andreas have a very dark blue (Almost black) appearance and wear a helmet with goggles, a mask and a tactical vest with "POLICE" printed on the front and back. GTA San Andreas SWAT Officers also have kneepads and a holster containing a Glock pistol (though the Glock is never used in the game and is only seen in cutscenes). 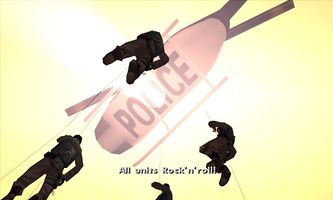 SWAT officers being sent down from a Police Maverick in Grand Theft Auto: San Andreas.

Once the player is chased by them they will chase the player in their vans. They will also deploy spike strips to slow the player down. They will be deployed out of the helicopters by means of grappling, but only four at a time. Only in GTA Liberty City Stories, and GTA Vice City Stories will they attack the player while stationed in a roadblock. They are also well armored. Their vans are heavy, and are just a little slower than the Police Car.

Retrieved from ‘https://www.grandtheftwiki.com/index.php?title=SWAT&oldid=395811’
Categories:
Cookies help us deliver our services. By using our services, you agree to our use of cookies.