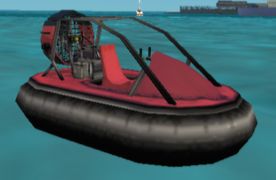 Like the Vortex, the Bovver'64 lacks stable control as it has no grip and is considerably below average in speed; however, it can be driven on both the streets and the water. If it flips over when on the water, it is impossible to get it back up again. The Bovver'64 is also easily damaged and destroyed; strangely enough, the Bovver'64 is identified by the game as an aircraft and thus, it has the same violent explosion as the game's aircraft. The Bovver'64 cannot be repaired at a Pay 'n' Spray.

The Bovver'64 can be bought behind The Clymenus Suite safehouse upon completing the mission "White Lies" where this vehicle is used to collect packages falling from a helicopter. It is also used in the side missions Haiti Hover Race and Harbor Hover Race.

Retrieved from ‘https://www.grandtheftwiki.com/index.php?title=Bovver%2764&oldid=404741’
Categories:
Cookies help us deliver our services. By using our services, you agree to our use of cookies.