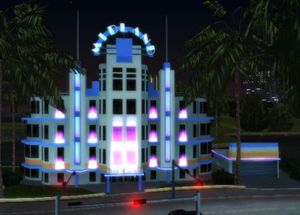 The Midland in GTA Vice City Stories, which houses the Clymenus Suite.

The Clymenus Suite is a safehouse in Grand Theft Auto: Vice City Stories unlocked upon completing the mission "From Zero to Hero".

After ripping off a large amount of cocaine supposedly belonging to Jerry Martinez, Lance Vance, confident that he and his brother Victor Vance were finally rich, bought a fancy house for himself in Ocean Beach, and the Clymenus Suite in Washington Beach for Vic.

Located along the western shoreline of Washington Beach's northwestern island in Vice City, the Clymenus Suite is based in a Streamline Moderne/Art Deco hotel or apartment known simply as The Midland. The same location in Grand Theft Auto: Vice City is occupied by a row of low-rise apartments are, thus implying that The Midland was demolished between events in GTA Vice City Stories (1984) and GTA Vice City (1986).

Implied to be located on the highest floors of The Midland, the suite is generally accepted to be superior to both the 101 Bayshore Avenue and The Compound safehouses, being far more spacious, featuring two floors (a living room and kitchen on the first, and the bedroom on the second), large windows offering views of Washington Beach (including the fairgrounds), and a roof with two helicopter pads, one of which is used to spawn a Little Willie for $5,000; when 100% game completion is achieved the player can use the television in the living room to watch all the storyline's cutscenes. The save point is located in the living room, while a health pickup can be found in the kitchen. Access to the wardrobe and the roof are provided upstairs.

The safehouse's garage, which is located directly north of the Midland, can store up to three vehicles. Behind the Midland, pickups reward for bursting Red Balloons will spawn along the back of the building, and a Bovver '64 hovercraft can be purchased for $4,500 at the dock.

According to the Vice City Inquirer, the property is valued at $225,500. It is described to have "laundry and gym facilities, low maintenance costs, balcony, [and] central air conditioning."

Retrieved from ‘https://www.grandtheftwiki.com/index.php?title=The_Clymenus_Suite&oldid=353362’
Categories:
Cookies help us deliver our services. By using our services, you agree to our use of cookies.