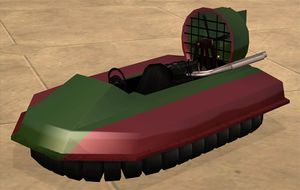 A Vortex in GTA San Andreas.

The Vortex is a hovercraft in Grand Theft Auto: San Andreas.

The Vortex is a single-seater drivable hovercraft, capable of moving on land and water, and glide short distances. Steering is difficult because it has a fan with a rudder rather than wheels or a rudder in the water, thus having no contract to the ground or water and no grip. It is possible to glide the Vortex for a short period of time if the player sends the vehicle flaying off of a high location, and has a good driving skill.

If it is abandoned in the water it will sink. If it sustains too much damage or is shot too many times, despite its small size, it will also explode quite violently, similar to an aircraft explosion.

It is also used for two tests in Boat School, which can be accessed in Bayside Marina. 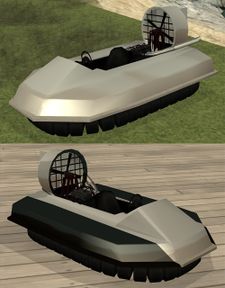 Three Vortexs' with unique color schemes can be found during "Cut Throat Business". Two of them, which are used by the player and Madd Dogg to chase OG Loc, are all-white, while the third Vortex driven by OG Loc is black with a white stripe. The player can only store any Vortex's in a garage by failing the mission, as the chase eventually switches to a Kart chase at a pier, forcing the player to abandon the hovercrafts. In addition, while it is possible for the player to use any of the hovercrafts to chase OG Loc while he is on a Kart, the player will ultimately lose the vehicle upon completion of the mission.

The white Vortex is more easily attainable, requiring the player simply ignore the instruction to chase OG Loc at any point of the hovercraft chase, failing the mission and gaining full control of the vehicle. OG Loc's hovercraft is attainable after he ditches the vehicle at the pier, and also requires the player cease to pursue him and fail the mission. Another method involves simply having to kill Madd Dogg in the beginning of the pursuit before OG Loc is out of sight to gain access to any one of the three hovercrafts.

Like the Kart, the Vortex will only spawn in specific locations after the mission "Cut Throat Business", appearing the following locations:

The vehicle can also be spawned using a cheat code.

Retrieved from ‘https://www.grandtheftwiki.com/index.php?title=Vortex&oldid=418502’
Categories:
Cookies help us deliver our services. By using our services, you agree to our use of cookies.