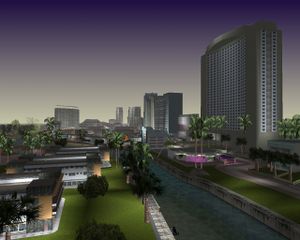 Vice Point in GTA Vice City, as viewed to the north. The Malibu Club can be seen in the foreground. 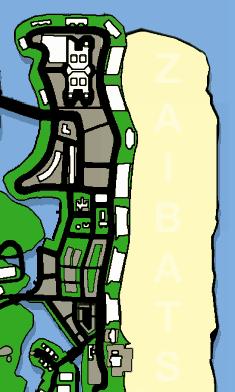 Vice Point is a more middle class and residential area of Vice Beach, covering the remaining areas of the island at the north, and consisting of larger apartment buildings and hotels aligned along the shore as well as medium sized homes and smaller apartment complexes inland. The part of Vice Beach that is located in the area includes a dirt bike track.

The North Point Mall (known as Vice Point Mall in Grand Theft Auto: Vice City Stories), a large mall located in the north end of Vice Point and accessible by the player. The mall, among others, contains a few eateries, as well as two weapons stores and a clothing pickup. In the GTA Vice City Stories rendition, the layout is essentially the same, though some of the businesses that are in 1986 are not there in 1984. There is only one weapons store.

The Malibu Club is situated on southern Vice Point, along with Avery's Construction Site. A Police Station is also located further north, as is another hospital, along with the El Swanko Casa safehouse.

In Grand Theft Auto: Vice City, the northern part of Vice Point is the turf of the Sharks gang while the Patrol Invest Group provide security at the North Point Mall and the surrounding areas. Unfortunately, these two gangs do not get along well and Vice Point acts as the site of an aggresive turf war between the Sharks gang and the Patrol Invest Group. Police act against both parties in this situation. In this area, it is not uncommon to see a gun battle between a group of Sharks gangsters and one or two PIGS. Also it is not uncommon to see Police Officers chasing PIGs and Street Criminals. The player can rack up a $50 "Good Citizen Bonus" by punching or a street ciminal or PIG being chased by a police officer. The player has to be careful when doing so; the street criminal that got hit may attack the player and the PIG, along with other nearby PIGs will attack the player with a pistol. Also, accidently hitting the cop will give the player a one star wanted level, killing the cop will give the player two.

Retrieved from ‘https://www.grandtheftwiki.com/index.php?title=Vice_Point&oldid=352331’
Category:
Cookies help us deliver our services. By using our services, you agree to our use of cookies.