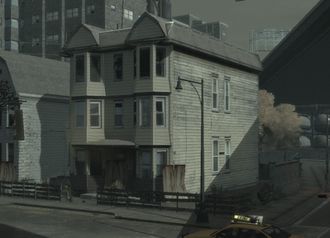 Exterior of Brian Jeremy's Safehouse in The Lost and Damned.

Brian Jeremy's Safehouse is a safehouse in The Lost and Damned. It is unlocked after the mission "Bad Standing", when Johnny Klebitz kills Brian Jeremy or lets him escape.

The safehouse is essentially a dilapidated three-floor yellow corner townhouse at Emery Street in west Tudor, Alderney, just below the western half of Plumber's Skyway. While seemingly appearing with three floors up front, the player can only access two floors of the building inside, as the second staircase is destroyed. If the player manages to reach the third floor the door is not accessible. The building is also permanently boarded from the front, so the player can only enter the house from its back door.

Like the Lost's clubhouse, bikes unlocked by races and completing Angus' Bike Thefts will spawn outside the safehouse. In addition, a parking spot is provided in front, allowing the player to save up to four bikes or two cars of their choosing.

Besides having a mattress in the second floor bedroom which the player can use to save games and serving as a spawn point for weapons awarded by completing Gang Wars, the interior of the safehouse is otherwise largely non-functional. Although the safehouse has a television and a computer, neither of them are functional, let alone usable. The television is not plugged into an electrical outlet, while the computer is found broken in the safehouse's backroom. As with the Lost's clubhouse, Liberty City Hardcore can be heard inside from two radios (one in the kitchen, and one on the second floor).

The safehouse was originally Brian Jeremy's home. During "Bad Standing", Johnny (along with Terry Thorpe and Clay Simons, if the player chooses) attacks Brian's house and kills everyone in there, before proceeding to Brian's room, where he can kill him on the spot or allow him to flee and abandon the house. Upon completion of the mission, the player will receive a text message from Jim Fitzgerald informing that the player can use Brian's safehouse, adding it "beats that old bed at the clubhouse".

The design of the safehouse interchanges between the base game and its episodes. It appears in two forms, as either a non-interactive location or a fully interactive safehouse, although both renditions are near identical in terms of the exterior's designs except the back door, and second story window present in the interactive rendition. The former design is present in GTA IV, whereas the safehouse in The Lost and Damned, is, obviously interactive.

Retrieved from ‘https://www.grandtheftwiki.com/index.php?title=Brian_Jeremy%27s_Safehouse&oldid=375843’
Categories:
Cookies help us deliver our services. By using our services, you agree to our use of cookies.