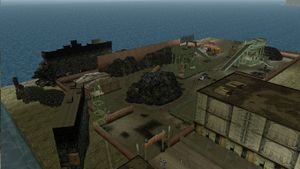 City Scrap, also known as the Junk Yard, Vice City Junkyard and Little Haiti Junkyard is a junkyard in Grand Theft Auto: Vice City and Grand Theft Auto: Vice City Stories. It is located in Little Haiti, Vice City, just a short walk away from the Little Haiti Well Stacked Pizza Co. resturant, Funeraria Romero, Carnicero Romero, and the Haitian Drugs Factory. A Trashmaster spawns inside the junkyard. Several garbage skips and cranes can be found inside the junkyard, although they cannot be operated, destroyed, and/or driven. There is also a large hangar and two conveyor belts in the junkyard although the conveyor belt is non-interactive.

A Stubby Shotgun can be found behind the hangar.

In the mission Death Row, Tommy Vercetti, after recieving information from Kent Paul, goes to the City Scrap junkyard to rescue Lance Vance, who is being tortured to death by members of the Diaz' Gang after he prematurely attempted to kill Ricardo Diaz to avenge the death of his brother Victor Vance. Tommy shoots through a large number of Diaz' Gang members and enters the hangar in which Lance is held in. Tommy angrily states that his "careful planning has been blown to shit" thanks to Lance. He then tells Lance that "he screwed up real good". After a short conversation, Tommy takes Lance to the Schuman Health Care Center in Downtown to recover from his injuries while avoiding attacks from Diaz' Gang members in Comets.

In the mission Juju Scramble, Tommy returns to the junkyard to retrieve a suitcase of Auntie Poulet's Juju powder, which was stored in the junkyard.

Retrieved from ‘https://www.grandtheftwiki.com/index.php?title=City_Scrap&oldid=415191’
Categories:
Cookies help us deliver our services. By using our services, you agree to our use of cookies.