"Victor" redirects here. For the character in The Ballad of Gay Tony, see Victor "Vic" Manzano.

Victor Vance was born in 1956 to a Dominican father and a white mother, Janet Vance. The couple later had two more children, Lance and Pete. Their mother, a drug addict, was unfit to raise her children and their father is presumed to have died. This led the three to be raised by their aunt, Enid, although it is unknown if she is the sister of the father or mother. Victor began looking after his youngest brother Pete, who has severe asthma, and began working to help pay Pete's expensive medical bills while Janet and Lance led problematic lives. Victor later enlisted in the US military in 1984, at the age of twenty-eight.

In GTA Vice City Stories, set in 1984, Vic arrives at Vice City's Fort Baxter Air Base under the watch of Sergeant Jerry Martinez. Unexpectedly, Martinez gives Vic orders such as picking up weed and hiding it for him, and bringing him a prostitute. He is dishonorably discharged from the army after drugs were found in his barracks and he was seen entering the base with a prostitute.

Vic is given work by gun runner Phil Cassidy, an associate of Martinez, who is in conflict with the Cholos, a street gang and rival gun runners. Vic then meets Phil's brother-in-law, Marty Jay Williams, leader of the Trailer Park Mafia, and his wife, Louise. Vic increases the Trailer Park Mafia's power in Vice City by fighting the Cholos, whom Marty also despises. Eventually Louise, tired of Marty's abusive nature, leaves her husband to live with her sister, Mary-Jo. Vic works for Louise, helping her weaken Marty's influence, eventually taking control of the Trailer Park Mafia's businesses in the city, prompting Marty to kidnap Louise. Vic saves her and kills Marty, disbanding the Trailer Park Mafia and initiating the rise of the Vance Crime Family. Vic is asked by Los Cabrones leader, Umberto Robina to come and talk about some stuff. After working for Umberto, Vic helps clearing out the Cholos out of Little Havana.

Vic later hooks up with his brother Lance and does jobs for shady figure Bryan Forbes. When they find out that Forbes is an undercover cop, they take him to an apartment and interrogate him on various jobs and deals within the city, in exchange for not killing him. However, he only leads the Vance brothers into trouble. Forbes is later killed after luring the brothers to a gay biker bar owned by white supremacists known as the White Stallionz. After securing more real estate in the city, the Vance brothers ambush the drug deal Forbes was talking about, Vic and Lance kill the thugs involved, stealing their supply trucks. Though Martinez pursues them in a Hunter helicopter and attempts to destroy the trucks, the Vances easily make it to the other half of the city.

Afterward, Victor calls Martinez to tell him how it feels to be backstabbed; Martinez states that the Mendez brothers, Diego and Armando Mendez, were behind the deal and will kill everyone involved in the accident, including Martinez himself. Vic and Lance eventually decide to work for the Mendez brothers, further increasing their influence in the city. Vic is put in contact with transsexual Reni Wassulmaier and makes several jobs for him/her, and ends up being put in contact with drug lord Ricardo Diaz.

At first, it's suggested that the Mendez brothers want an alliance with the Vance brothers, however, it turns out that they offer the Vic a deal, which is to hand over all his businesses to them and leave town or him and his family will be killed. Victor refuses to give up his interests after working for the Mendez brothers, and in retaliation, they knock Lance and him unconscious when their guard is down, then kidnap them. The Vance brothers wake up in an oil refinery in Viceport, and while attempting to escape, Mendez's men accidentally shoot at one of the gas tanks, causing it to explode. While this kills most of the henchmen, Lance is trapped in the inferno and separated from Vic. Luckily, Vic manages to save Lance before the oil refinery implodes.

With Phil and Umberto Robina's help, the Vance Crime Family defend their businesses from being attacked by the Mendez brothers' goons. However, Louise is kidnapped by Martinez and beaten viciously before Vic saves her. Later on Armando Mendez's men once again capture Louise, with Armando ending her life. In a rage, Vic slaughters Armando's bodyguards and enters the Mendez Mansion to confront Armando. Vic asks where Lance and Louise are; Armando replies that they are dead, however he tells Vic they did not feel a thing and pulls out a Flamethrower to kill him. Vic then kills Armando and finds Louise shot several times and an injured Lance who wakes up as Louise says her last words to Vic. Soon after, with the aid of drug lord, Ricardo Diaz and Louise's brother Phil Cassidy, Vic breaks up into his old army barracks and steals a Hunter helicopter under heavy guarding. Vic, later on, uses the helicopter to attack the Mendez Building in Downtown and ends up being shot down, but manages to make it to the roof of the building. Vic continues his way inside and kills all the goons on his way while finally finding Diego and enemy Jerry Martinez arriving in a Maverick. Vic takes out everyone and is confronted by both Diego and Martinez on the roof. Vic manages to win the battle and decides to lay low for a while on the money he's made along with his brother, Lance. While Lance offers a drug deal worth 20kg of cocaine, Vic refuses his interests and says he never wants to touch drugs ever again, to which Lance says 'whatever you say bro'. 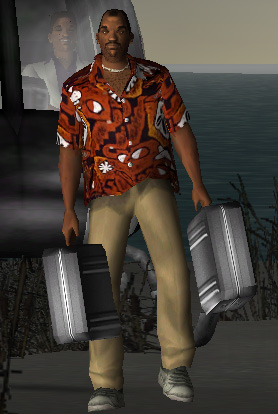 In Grand Theft Auto: Vice City, set two years later, Victor Vance is shown about to engage in a drug deal with Tommy Vercetti and his escorts, Harry and Lee. Lance can be sighted in the helicopter. Victor Vance is killed by the gunmen of drug lord Ricardo Diaz, who sabotaged the deal. Ever since the release of GTA Vice City Stories, fans have argued about whether the brother killed in the ambush was Victor or his brother Pete Vance, but it was confirmed on Rockstar's website that it was Victor who died in GTA Vice City[1].

Victor's personality differs from most of his previous counterparts. Throughout Grand Theft Auto: Vice City Stories, he claims that he wants out of the drug game but has no choice. Victor also shows emotion and feels regretful for having committed all the crime and killing. He always shows a serious attitude with a calm but angry personality and always wants to get everything he came for instead of doing it for nothing (as seen in "Taking the Fall"). However like most other GTA characters, he has little problems with killing anyone who stands in his way and he often insults the people he is about to kill. He is also quite hypocritical as he is always saying that he wants out and doesn't want to be in the drug game any more, but still continues to deal with drugs throughout his life. Ironically, Vic's hypocrisy led to his death two years later.

Retrieved from ‘https://www.grandtheftwiki.com/index.php?title=Victor_Vance&oldid=409796’
Categories:
Cookies help us deliver our services. By using our services, you agree to our use of cookies.