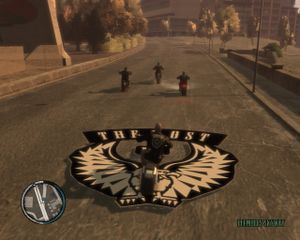 Johnny Klebitz following a group of Bikers led by Billy Grey with The Lost logo present.

Convoy Riding is a feature in the Grand Theft Auto IV episode The Lost and Damned. It involved leading or following a group of Lost Brotherhood bikers to reach a destination.

Early in the game, protagonist Johnny Klebitz, will usually follow a group of bikers led by the chapter leader Billy Grey. The player is required to stay close to the group of bikers as they move to their destination during missions. When following bikers, every minute or so a Lost Brotherhood logo will appear in the convoy somewhere. The player can move their bike into the logo and stay there for a few seconds to have their health and bike health restored. If the player already has full health then they will receive body armor instead. The player can hear the bikers talk if they stay in formation and if the player goes ahead of the convoy leader then the leader will yell at the player to get back in formation. 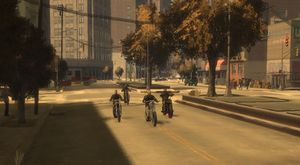 Later in the game following Billy's arrest, Johnny as the new chapter head will lead the chapter. This operates the same as following except that any bikers that the player leads will follow the player instead. If they fall too far behind then they will respawn near the convoy again.

When either leading or following a convoy during certain missions Johnny Klebitz may suggest that the group "Drop The Hammer" in which the formation will end and the player must race the other bikers to the location. Whether the player wins or loses the mission continues.

Depending on the progress of the story, the player must either ride in a convoy, or lead the chapter. Also requested backup from Terry, and Clay will see that the player must lead. Below is a list of missions involving following, racing, and leading (optional backup isn't listed):