A health pickup in GTA 2.

Health is a gift from space. Worship the worm
- in-game website description

Health is the measurement of the physical condition of the game's protagonist in the Grand Theft Auto series.

Health as a statistic

Measurement of health on HUDs was not prominent in the original Grand Theft Auto, as the game has no indication of the player's health - players can easily die from a single gunshot, burning fire, or splash damage from an explosion. Grand Theft Auto 2, however, gave players indication of the health for the first time, measuring it using a 5-heart gauge, with each heart denoted as full, half-sized, and depleted, thus giving the health a 10-level scale. 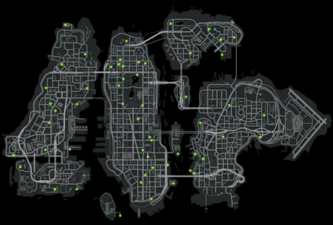 The map found on a website showing health locations in GTA IV.

Many things can damage the player's health: being shot, stabbed, or beaten, fire, explosives, being struck by a vehicle, drowning, being thrown from vehicles, and falling from heights. When the player's health is completely depleted, the protagonist is considered "wasted", and is then transported to the nearest hospital, after which a fee for healthcare will be assessed, and all weapons confiscated (except in the iOS and Android versions of GTA III, when dating Katie Zhan in GTA San Andreas, and from GTA IV onwards). Any mission that may have been in progress at the time is considered as failed.

Health can be replenished by picking up a health pickup, employing the services of a prostitute, or - in GTA San Andreas and GTA IV - by eating food or visiting a Save Point to save the game.

If the player loses health, it is possible to regain it to reduce the liklihood of dying and losing money to get patched up. Here are ways the player can obtain health:

With the exception of saving the game, calling a girlfriend that specialises in health, hijacking an ambulance, and using health cheats (normally not recommended), all methods of regaining health require money.

Retrieved from ‘https://www.grandtheftwiki.com/index.php?title=Health&oldid=415140’
Category:
Cookies help us deliver our services. By using our services, you agree to our use of cookies.