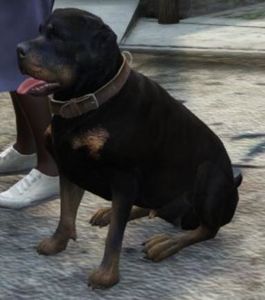 A rottweiler in Los Santos in GTA V.

Dogs are a type of animal introduced in Grand Theft Auto V. In an interview, producer Leslie Benzies has stated that their main role in the game is to guard restricted areas during and outside of missions, alerting enemies or law enforcement of the player's presence if spotted. To avoid being detected by guard dogs, the player must strategically plan how they will gain entry.Dogs also appear as pets for many NPCs, although one of the supporting characters of GTA V, Lamar Davis, owns one named Chop.

There are 15 different breeds of dogs, ranging from Rottweilers to Golden Retrievers. Dogs are usually seen being walked by their owner. Other times, dogs tend to spawn next to a house, while their owner sits nearby watching. All dogs are known to attack the player if they are physically provoked. Sometimes, dogs may attack the player unprovoked, for no reason at all. A dog also appears to Franklin Clinton, although not to anybody else, during two missions: Risk Assessment and Uncalculated Risk, both times to alert Franklin that Dom Beasley was in trouble.

Retrieved from ‘https://www.grandtheftwiki.com/index.php?title=Dogs&oldid=411145’
Category:
Cookies help us deliver our services. By using our services, you agree to our use of cookies.