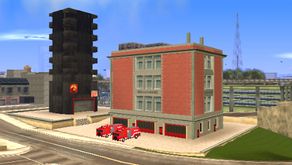 Located in Harwood, a district of Portland, the fire station serves as the fire station of Portland island. The station itself is medium sized, occupying a tall, brown rectangular-prism shaped building with three gates. Like the fire stations in Francis International Airport and Belleville Park, it is inaccessible to the player without the use of modifications, trainers and hacks. A Firetruck spawns in front of one of its gates in both renditions.

Retrieved from ‘https://www.grandtheftwiki.com/index.php?title=Harwood_Fire_Station&oldid=415950’
Categories:
Cookies help us deliver our services. By using our services, you agree to our use of cookies.