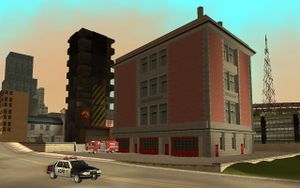 Whilst unnamed in Grand Theft Auto 1, the game's rendition of Liberty City spawns a Fire Truck model that is also shared with those appearing in Vice City. Obviously, its dual use in two different cities means the Fire Truck lacks any proper label designating the vehicle as belonging to any specific fire department (i.e. the "FDLC" initials), unlike the San Andreas Fire Truck, featuring only a "FIRE" label on the roof.

As are other emergency services in the game, Liberty City's Fire Trucks only arrives at the scene of emergencies; specifically, where multiple vehicles are destroyed in explosions and are burning as a result.

Like other emergency services in Liberty City, LCFD crews will arrive in a scene where fire from a player's Molotov cocktail or flamethrower, or burning wrecks are raging, attempting to put the flames out using their Fire Truck's powerful decked-mounted water cannon. Players can easily commandeer the LCFD's fire trucks to perform "Firefighter" side missions.

The Liberty City Fire Department founded since 1872 has three stations, one located on each island. Fire trucks can usually be found parked outside each of the three stations. The stations' locations are as follows:

While the Fire Trucks and Downtown fire station in Vice City features a unique FDVC logo, the Escobar International Airport fire stations reuse the LCFD's logo, with the "LC" (Liberty City) initials merely substituted by "VC" (Vice City). In Grand Theft Auto: Liberty City Stories, there are two fire trucks located outside the Staunton Island station. After completion of the mission Karmageddon for Ned Burner, entering the fire truck to the left (the player see in the game) will trigger the Karmageddon side mission. Completion of this will unlock a Molotov Cocktail spawn behind the fire station.

The FDLC in GTA III and GTA Liberty City Stories has several mottos, which can be spotted on the side of many firetrucks, these mottos include "Putting out since 1872" and "Don't burn in silence....... dial 911". 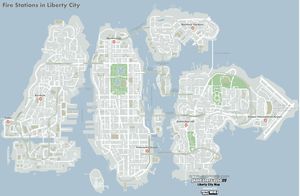 Map of fire stations in Liberty City in GTA IV.

Like in previous games, the Fire Department of Liberty City (FDLC) operates Fire Trucks in their service, and has several stations through out all of Liberty City and Alderney. The motto of the FDLC is "Feel The Burn"; this can be seen in fire houses as well as on all of the FDLC's apparatus.

Unlike previous renditions of fire departments, the GTA IV rendition of the FDLC is less responsive towards fire. They do not automatically rush to blazes, and can only be called in using the player's "911" mobile phone call. One of the only notable times the FDLC will respond to a fire is the mission "Rigged to Blow".

In addition to regular fire fighter NPC models, there exists a set of fire chief models which are meant to appear within fire houses, dressed in more formal attire and donning a "Chief" jacket. However, fire chiefs rarely, if ever, appear.

In total, there are at least eight functional station houses scattered all over Liberty City in GTA IV (fire stations in Alderney are not present in GTA Chinatown Wars, since Alderney is not featured in the game):

Note that in GTA IV, the only fire stations that have a parked fire truck outside the station are those in Bohan, Algonquin (with the exception of the Westminster firehouse) and Alderney.

Retrieved from ‘https://www.grandtheftwiki.com/index.php?title=Liberty_City_Fire_Department&oldid=417044’
Categories:
Cookies help us deliver our services. By using our services, you agree to our use of cookies.