This article is about modifying game files. For the garages that modify vehicles in Grand Theft Auto: San Andreas, see Mod Garages. 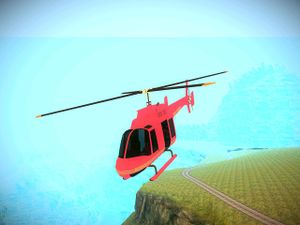 A Maverick from GTA IV, in GTA San Andreas. 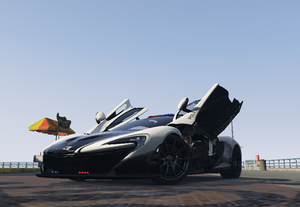 A popular car to mod, particularly in GTA V, is the police cars. 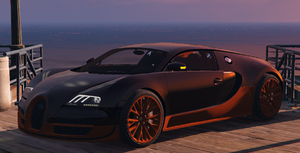 Almost all modifications are entirely free, and may be downloaded and used by anybody. However, there are restrictions on editing and distributing the modification, so always ask permission from the author.

Modifications are mainly only used on PC and, recently, mobile (iOS and Android) versions of Grand Theft Auto games, although the latter two require jailbreaking (iOS) or root access (Android). There are methods of modifying console versions, but these are complex and usually break the license agreement of the game and the game console.

Modifications are applicable for:

Modifications in special websites usually are distributed on several categories, depending on the aspect of the game that they change: 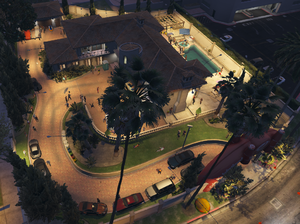 An example of a map mod in GTA V, which spawns objects that transforms a house in Mad Wayne Thunder Drive to a party-like house.

Adds buildings, islands, towns, and other objects to an existent landscape of the GTA game. They consist of the added model description with corresponding textures and collision data. Examples include:

Alters or replaces the mission script (main.scm in all of the GTA III Era games) of the GTA game. These could alter details of missions or even add entirely new missions. The mission script file is responsible for what-happens-when, so modifying it can achieve almost any effect.

Modifications of this type do not change anything appreciable but only correct errors present in the original GTA game, including but not limited to:

Some patches or fixes attempt to restore hidden/removed features in the game, such as the Ghost Town in GTA III and scenes for adults in GTA San Andreas. 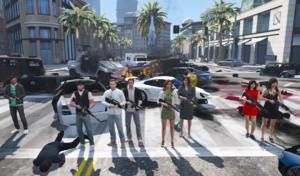 An example of a player mod. The player (green striped shirt in the center) is changed with an NPC skin and were also surrounded with his bodyguards.

Basically changes the model of the protagonist or other NPCs in the game, adds new clothing items, or even adds new sound/animation data. These began after the release of GTA III, which contained an appreciable alternate skin for Claude. Examples include: 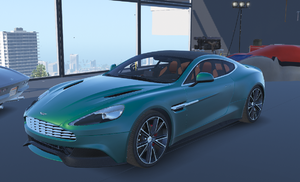 An example of a vehicle mod, an Aston Martin Vanquish which replaces the Massacro.

As a side note, the majority of vehicle mods are real-life vehicles, usually ripped from other games with vehicles (e.g. racing games, although other Grand Theft Auto games are also applicable).

In the case of Grand Theft Auto V, only texture mods for the in-game vehicles are currently available, while there are modifications that can make the cars behave mostly like, if not exactly like their real-life counterparts in terms of performance.

Alters weapon models and data, like accuracy or rate of fire, and shot sound. 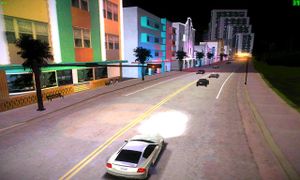 An example of a total conversion mod in GTA San Andreas, the GTA United, which replaces the state of San Andreas with Vice City and Liberty City maps.

Total Conversions encompass many of these features at once. TCs generally change everything in that GTA game, including the map, vehicles, pedestrians, player, and missions. A few TC mods been made and completed (e.g. GTA Long Night, a zombified Vice City total conversion mod for GTA Vice City), and there have been many more planned that have never reached a release.

Sometimes known as script mods, gameplay mods change the way players play the game. These mod usually have their own custom script but don't interfere with the main.scm script file. Script mods are also sometimes known as "for fun" mods because they are often used to spawn so-called "myths" in certain places, giving players special weapons, the ability to control the weather, etc. Script mods usually start the player off with maxed-out muscle, a wad of cash, all cities/bridges unlocked and sometimes with an entire arsenal of weapons to use. Sometimes these mods are just simple, such as modifying the game's clock to last up to 24 hours.

Another popular type of mod is fixing the physics. Originally, the physics engine was unrealistic. However, because of CLEO mods, some gamers have been able to change the physics engine by importing the RAGE engine (Rockstar Advanced Game Engine) into GTA San Andreas and GTA Vice City. A popular mod is the "GTA San Andreas Rag-doll" mod. In GTA III, this is much harder to do since limbs come off in the PC version.

Another popular type of mod is cosmetic replacement. For example, there are mods that replace fictional brands into real ones (e.g. Burger Shot changing into Burger King) or replace vehicles with their real-life counterparts (e.g. the Super GT from GTA IV changing into an Aston Martin DB9). Sometimes, these even replace district names to match their real ones. An example is the GTA San Andreas real mod.

Some third-party programs wrongly count as modifications. The basic criterion for modification is changing the original game 'content' files, and these programs actually do not touch the game files. 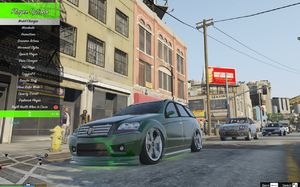 An example of a trainer, the Menyoo Trainer in GTA V.

Trainers are programs that run alongside the game and manipulate the game's data stored in memory. These programs can change many different things, ranging from the player's health, armor, weapons, skill, and even location; to being able to spawn vehicles, modify the current vehicle (e.g. color, damage etc), and edit vehicles stored in garages; to modifying the time, game speed, and weather.

As all PC versions of the GTA III Era games lack multiplayer capabilities, gamer communities started creating unofficial multiplayer clients & servers. These programs allow to play online with other players on public servers, or offer 'head-to-head' competitions between directly connected players. Types of gameplay provided may differ between different servers, but usually are versions of FPS-like deathmatch/CTF or rally/street races. Examples include: 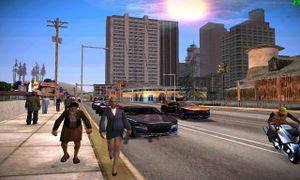 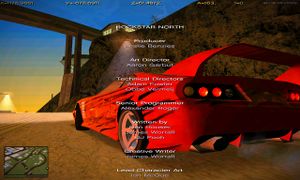 An example of GTA San Andreas CLEO mod, which makes the player able to made the credits appear anytime they want.

Some things, like car colors and handling, weapons characteristics, and ped relations, can be changed easily because all the data necessary stay in plain-text files, with basic guidelines for their usage from game developers in file headers. However, creating more advanced modifications (such as entire buildings or cars) is more difficult, and usually requires some advance experience in creating models for games. Google SketchUp is a good program for creating building models. 3ds Max, Lightwave, and ZModeler are also used. Textures are less complex, but still tricky. Textures normally should be the same size as their originals, because bigger ones may cause the game to lag depending on FPS, as those appear in higher resolution. Also, some textures may contain an alpha texture.

The mission modifications are even harder to produce. First, mission script for a game must be presented in compiled form, which require use of special compiler/decompiler tools for any changes. Second, script language is not officially documented, and worse, each script editor has their own interpretation of it. Finally, many script features depend on hardcoded functions in the game executable, which can lead to unexpected troubles with different usage approaches, game region versions, official patches, and even depends on end-user hardware. These results with mission modifications are usually simple gameplay missions. The most often used mission script editor is Mission Builder by Barton Waterduck and its derivative, Sanny Builder. Recently, however, a tool called Design Your Own Mission (DYOM), specifically for San Andreas, makes making missions less complex, but these are usually simple.

For Total Conversions, there are even more specific tools needed, like ped & traffic paths editor, GXT (texts) editor, interface (menu) editor, and so on. It is strongly advised that you do not attempt to do more than you are capable of. Do not expect to be able to recreate your favorite vehicle in a few hours. Many modifications take months.

Vice City Mod Manager (VCMM) is a tool for modifying objects in GTA Vice City. VCMM uses its own file format VCM, and mods can be downloaded in this format from many different websites.

San Andreas Mod Manager (SAMM) is a mod manager for GTA San Andreas. It does the same thing as Vice City Mod Manager. 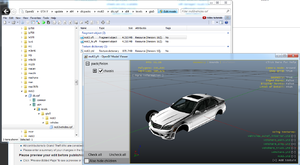 A GTA V mod being previewed with OpenIV.

Vehicle, player, and weapon mods are usually constructed on replacement of already present game objects, because there are limits to number of objects of such kind in game engine, often already filled up by developers, and addition of the new model will require a lot of 'precision' editing in many game files. Therefore, a new vehicle, weapon, or character model will replace the existing one and all installation is reduced to work with IMG archives and little editing of one or two game files in text editor. Always do backup of files touched before any change occurs.

Installation of larger modifications, such as maps, depends on a method chosen by the developer of mod. Some mods are made as file replacements, where the mod comes in the form of an archive which you must unpack to the original game's directory. This simplified installation costs large files to download. Other mods come with special installers ("mod installers"), which automate work with IMG archives and text-files editing. Both methods are usually incompatible with other mods present, so you must install them over special fresh installation of the original game.

As with the previous GTA games, modding continues to be prominent on Grand Theft Auto IV.

While most players mod the PC version of Grand Theft Auto IV, many players also mod the Xbox 360 and PS3 versions of GTA IV. One of the most predominantly used mods on the console versions of GTA IV will give the player the ability to shoot rockets out of guns other than rocket launchers. Many modders will also use a "speedup" mod that allows them to drive vehicles at incredibly fast speeds, sometimes fast enough to make the vehicle start flying. Modders also spawn cars that are not available in multiplayer with an array of unofficial paintjobs. Modders will also spawn story mode characters as bodyguards. Many people feel angry and annoyed to see a modder in a Free Mode game, usually because they are killing the other players with their modified weapons. Often times a modder will be kicked out of the game or trash-talked to. Despite modding being relatively annoying to some, others find modding fun and use it as a way to obtain various abilities or vehicles for their own personal enjoyment or for the players in the current multiplayer game.

As with the previous GTA games, modding continues to be prominent on Grand Theft Auto V. However, Rockstar originally banned any sort of modifications, even in Single Player, due to the presence of Grand Theft Auto Online. Also, in every game title update, all script mods and game configuration mods will be broken and rendered unusable and an update is required to make the game be able to run again, also the update.rpf file will be reset to the vanilla state meaning the player had to make backups before updating the game.

You modify your game at your own risk. There is no guarantee that all modifications you download will work, or whether the instructions will be complete. You should make yourself familiar with simple well-known modifications (such as vehicles) before attempting to install larger and more complex models.

Always read the instructions thoroughly, and always backup files before you edit!

Modifying GTA
Retrieved from ‘https://www.grandtheftwiki.com/index.php?title=Modifications&oldid=416257’
Categories:
Cookies help us deliver our services. By using our services, you agree to our use of cookies.