Depicted as a sleek 1960s sports car, the Jugular E is apparently based on the Jaguar E-Type and its name, like the Jugular from Grand Theft Auto 1, references both the Jaguar name and the jugular vein. In addition to appearing with a single-tone body colour, the Jugular E may also come with a two-tone "racing" stripe that runs from the front to the back of the car. 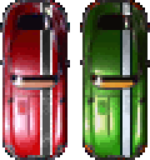 Alternate paintworks of the Jugular E.

Despite its design, the Jugular E only fares averagely in performance, with slightly above average top speed, acceleration and grip, and average brakes and handling. The base export value of the car is reasonably good, selling at a minimum of £900 if delivered in perfect condition.

Retrieved from ‘https://www.grandtheftwiki.com/index.php?title=Jugular_E&oldid=373235’
Categories:
Cookies help us deliver our services. By using our services, you agree to our use of cookies.