This article is about the first game in the Grand Theft Auto series. Visit that link for all the others.

Grand Theft Auto, now known primarily as GTA 1, was the first game in the Grand Theft Auto series, released on PlayStation 1, PC and later on Game Boy Color. Many GTA games have been made since.

Grand Theft Auto is set in Liberty City, San Andreas and Vice City in 1997. These renditions of the cities are vastly different from their more well-known counterparts in the GTA III Era. In the game, the player can choose from one of about eight protagonists, and even change their names.

The PC version of GTA1 is now available for free download here, along with Grand Theft Auto 2 and another Rockstar game, Wild Metal: Reclaim the Future. It's not the original game, but has been remade to work on modern Windows operating systems.

The player works for Bubby. They have the player do several jobs, ranging from stealing two taxis to killing the police chief. One mission also involves a trap in the form of a bomb on a bus that will blow up if it gets below 50 mph (this was inspired by the movie Speed). Once the player has enough points, A Don Sonetti's guy will want to speak to them. Apparently the player double-crossed Bald Man Sonetti, and is a dead man if it happens again.

Once again, the player must do several jobs to complete the level. Right away, Bubby calls saying "Sasha" has been kidnapped (failing the mission will reveal that Sasha is actually the boss' puppy). The player can choose to rescue her, or fail it and the cops will bring her in. Someone heard her scream in a trunk. Once the player does some jobs (including killing Sonetti) and has enough points again, Bubby will ask the player to come see him. Bubby will say the player did a good job, but the cops are close enough to look up his ass with flashlights. Bubby, however, booked the player a flight to San Andreas.

Now the player has arrived in San Andreas. The player works for Uncle Fu. Once the player does enough work and gets enough points, they can see the old man. He is building a crime syndicate of extraordinary magnitude, and the player honors his family.

Now, the player works for El Burro. Once the player does enough jobs, pleases him, and gets enough points, he'll ask them to come over to his place. The player did good work for him, and he is grateful. Now he's going to return the favor. He's going to reward the player "personal" this time.

A cop named Samuel Deever calls the player because apparently they screwed up somewhere. The player works for him now. Following the same routine, once the player gets enough points, they can go see a now very angry Deever. If the player crosses him again, they're screwed for life... if they even have a life after.

Now the player works for Brother Marcus. Most jobs involve killing. When the player gets enough points and goes to see him, Brother Marcus is proud, and apparently the player got the job done. He thinks the player has done a good job. Now he doesn't think he'll be seeing the player for a long time. 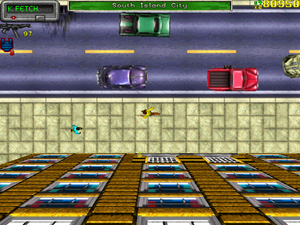 The third person view used in the game.

The original Grand Theft Auto is made up of a series of levels each set in one of the three cities in the game. In each level, the player has a target number of points to achieve, and five lives to attain the score.

The score counter doubles as a money meter; the player can spend this money on paint jobs and various other things. However, any money spent is of course taken away from the score, making the goal that little bit further away.

On obtaining the target number of points, the player must then drive to a certain location to complete the level, which allows progress to the next one.

Apart from that, the player is free to do whatever they want. The player can just explore the city, cause death and destruction, or steal and sell cars for profit, although completing a level will almost certainly require the completion of missions. Even in missions there is still some freedom, as usually the player is free to choose the route to take, although the destination is usually fixed. This level of freedom was not found in most action-based computer games at the time. However, the player is given limited lives so free roaming is, somewhat limited, if the player isn't careful.

There are various ways in which to earn the points needed to complete each level.

Some points can be earned by committing various crimes, such as ramming cars (10 points each), and killing police (1000 each). The more serious the crime, the more points, but also the more the police will pay attention to the player. Another way to make money is to steal cars, and sell them at the many docks around each cities, usually earning several thousand points.

These activities can give the player quite a number of points but they are not sufficient to earn the millions of points needed to complete each level (unless the player has a lot of patience), so it is necessary to take on missions to complete a level. On successful completion of a mission, the player gets 'paid', a large amount of points. A typical payment is in the region of 50,000 points.

Also after completing a mission, the score multiplier is increased by one. The score multiplier is multiplied by the normal score for something, to get the points actually awarded. For example a multiplier of three will mean that the player gets three time the regular amount of points, so 30 points for ramming a car, rather than the normal 10 points. This applies for anything points are awarded for, including the payment for completing a mission.

In the Game Boy port, score multipliers are handled differently. The player can collect floating "X"'s hidden in each city, that automatically add a multiplier to the score counter. The first time one is picked up it says "×2", the second time it says "×3", and so on. This only affects points gained after acquiring the multiplier, not the points the player already has, so it is in the player's best interests to seek the "X"'s as soon as possible.

The three cities in which the game is set are modeled after real cities, in terms of landscape and style. They are Liberty City ( New York City), San Andreas (San Francisco), and Vice City (Miami).

Those three cities later became the settings for the GTA III era games and GTA IV era games. Although in GTA San Andreas, San Andreas is expanded from a city to an American state, which contains three cities of its own.

In most cases, missions are started by answering telephones, although some missions are allocated on the spot, or are triggered by entering certain vehicles. Once a phone is touched, the player is stuck doing that mission until they pass or fail it, but with the cars it is different. The player is told "I've got a new job for you, if you want it. Otherwise get the hell out of my car." They then have a few seconds to jump out before that mission begins.

At the start of each mission, the player will be given a series of instructions they must follow. The instructions are given in stages, so the objectives can change in a given situation.

Many of the missions involve tasks that can be completed at the player's own pace, so the player can take a leisurely pace, and observe the traffic laws, although there is always a temptation to cut corners. However, sometimes the game imposes time limits on mission completion, or there may be people giving chase, such as enemy gangsters, or the police, forcing the player to cut corners, to get to the destination on time and/or evade the pursuers. This means running red lights, driving on the sidewalk (risking running over pedestrians), and finding shortcuts.

Law enforcement in GTA 1 is generally characterized as a obstacle in the game, appearing in the force of police officers who are ready to pursue arrest the player if they player has committed sufficient criminal acts. The player's wanted level is defined by the number of police heads seen on top of the screen; the more police heads the player amasses by committing more crime, the more determined the police will be to subdue the player. The player can have up to four police heads, which at this point leads to very hostile officers.

There are only two ways to eliminate the player's wanted level: But either driving their vehicle to a spray shop, or picking up a "cop bribe" pickup in certain parts of each city.

Despite its age, GTA 1 even included a multiplayer function, which allowed players to battle with human opponents. This was possible over either a LAN connection or using a null modem cable.

The original Grand Theft Auto 1 was first available for DOS, and then later ported to Microsoft Windows, PlayStation, and Game Boy Color. Surprisingly, the Game Boy Color version was unabridged, which was quite a technical achievement due to the sheer size of the cities, converted tile-for-tile from the PC original, making them many times larger than most Game Boy Color game worlds were because of the handheld's limited hardware. To cater for the target younger generation, however, the game was heavily censored, with gore and swearing removed.

The game, with its violent subject matter, generated a great deal of controversy. However, this was deemed to be intentional, and was the first game known to have been publicised in such a way. Take-Two Interactive, the publishers of Grand Theft Auto, hired publicist Max Clifford to generate an aura of controversy about the game in the local media. As a result, politicians stepped into the fray. Whatever the impact on game censorship and the perception of video gaming, the publicity worked - the title was hugely successful simply because those attempting to ban the game were inadvertently generating publicity for it. This has been a known and recognized phenomenon of violent video games ever since.

Retrieved from ‘https://www.grandtheftwiki.com/index.php?title=Grand_Theft_Auto_1&oldid=402085’
Categories:
Cookies help us deliver our services. By using our services, you agree to our use of cookies.