Grand Theft Auto: London, 1969 (official title Grand Theft Auto Mission Pack #1: London 1969) is the first expansion pack, to the original Grand Theft Auto. GTA London 1969 was released in 1999 for the PC and PlayStation. It offered thirty-two brand new missions, as well as a total of thirty new vehicles, relative to the time period.

The game is very similar to the original Grand Theft Auto because it uses the same game engine and is presented in the same format of missions, sections and cutscenes.

Another expansion pack, Grand Theft Auto: London 1961, was later released solely for the PC version and offered as free download from Rockstar Games. It requires GTA London 1969, which in turn requires GTA 1.

As the name implies, the game takes place in London in the year 1969. The player once again enters the role of a criminal looking to work his or her way up the career ladder of organized crime. The temporal setting has been exploited through a number of cultural and historical references, including the appearance of a James Bond-like character and the usage of more or less authentic slang. In addition, the cars drive on the left side of the road, as is the case in Britain.

The missions are similar to the GTA 1's missions: usually you get jobs from payphones, or you activate a mission when you enter a vehicle. 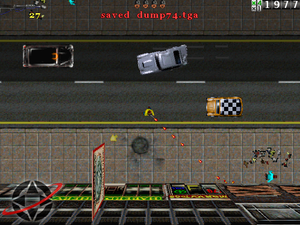 The gameplay is almost the same in GTA 1 and in the expansion packs, except the location and British specifics such as driving on the left.

Retrieved from ‘https://www.grandtheftwiki.com/index.php?title=Grand_Theft_Auto:_London_1969&oldid=418787’
Categories:
Cookies help us deliver our services. By using our services, you agree to our use of cookies.