The Windsor is designed as a 1960s to early 1970s classic European convertible sports car, appearing with either its black canvas top up or down. Originally designed to mimic the late-model Jaguar E-Type, the car was further redesigned during GTA San Andreas' development, resulting in a final form with a front end more similar to that of a 1966–1968 Ferrari 330 GTS or a Ferrari 365.

In Grand Theft Auto V and Grand Theft Auto Online, the Windsor, now branded as an Enus vehicle, is no longer styled after a classic grand tourer. Instead, it is a large contemporary coupe, with heavy inspiration from the Rolls-Royce Ghost and Rolls-Royce Wraith, including some elements from the Bentley Continental Flying Spur. The Windsor has an upraised hood, and it is also the very first car in the entire Grand Theft Auto series (not counting lowriders and tuners in GTA San Andreas) to feature multiple designer liveries (eight in total), which can be applied to the exterior of the car, much like the vinyl wrapping process.

The Windsor is a very fast car; however, it does not match up to some of the "elite" cars. The Windsor's engine is very loud, giving out a throaty roar, sounding more like a V8 than the four-cylinder engine that came in all Alfa Spiders or the 6-cylinder/V12 that came in the all Jaguar E-Types, but acceleration and speed are on par. Cornering is very difficult, as the car seems to be much heavier than it looks, and the car tends to subtly fishtail or drift, despite running at mid speeds, though experienced players can control its drifting capabilities.

The Windsor has a powerful V12 engine under the hood, giving it a unique sound. Performance-wise, the Windsor falls in the mid-tier class for the "Coupes" class, with a 0-60 mph (97 km/h) time slotting just behind the Oracle. The Windsor has a fairly good top speed, allowing it to keep up with most coupes and even some sports cars, including the Voltic electric supercar. However, the very heavy nature of the GTA San Andreas rendition has been retained in the GTA V rendition of the Windsor, hampering its handling abilities, especially during high-speed cornering. Braking is average for this car's class. The Windsor has a top speed of 189 mph (305 km/h).

The Windsor can be modified at a TransFender, but is only offered a bare minimum of modification options: 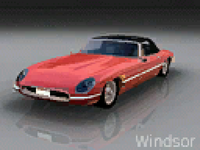 A picture of a work-in-progress Windsor found inside the Driving School.

Retrieved from ‘https://www.grandtheftwiki.com/index.php?title=Windsor&oldid=415784’
Categories:
Cookies help us deliver our services. By using our services, you agree to our use of cookies.