The NRG 900 is the only series of superbikes in GTA IV, and is available in two variants: The NRG 900F and the NRG 900RR. Cosmetic differences between the bikes are apparent, as the F variant is intended for casual use, while the RR variant is significantly sportier with fewer accessories and more aggressive styling. The NRG 900 is based on the Ducati 999R, but its headlight cover can differ between the 999-style cover, and one based on the Ducati 888's cover. The 888-style NRG 900 is called the NRG 900F, while the 999R-style NRG is called the NRG 900RR. An NRG 900 may also appear with any one of three exhaust pipe variations. The variants have no differences in performance.

The NRG 900 is the fastest bike in GTA IV, easily beating the PCJ 600 in terms of speed. However, the bike lends itself to slow and stiff cornering, which can make other bikes better choices for racing. Addittional competition is introduced in The Lost and Damned, but the NRG 900 remains a viable choice against these bikes nonetheless. 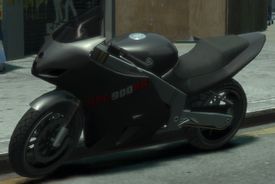 A requested variant of the NRG900 in Stevie's Car Thefts in GTA IV.

In GTA IV, an NRG 900 is requested as part of Stevie's Car Thefts, appearing with a uniquely dark gray body color. As a new NRG 900 will respawn at the same spot until the player delivers one to S&M Auto Sales, the player can save one at their safehouse before delivering another.

Retrieved from ‘https://www.grandtheftwiki.com/index.php?title=NRG_900&oldid=381052’
Categories:
Cookies help us deliver our services. By using our services, you agree to our use of cookies.