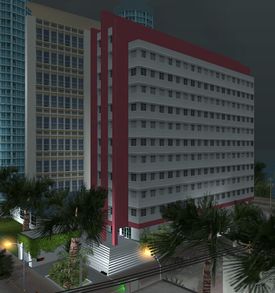 Ocean Heights Apartment is an apartment in southern Ocean Beach, Vice City, prominently featured in Grand Theft Auto: Vice City as one of the player's safehouses.

Available for purchase immediately after "In the beginning...", Ocean Heights Apartment is a sleek red-and-white apartment tower visible around much of Ocean Beach, and is situated just southwest from the Pole Position Club, opposite the Maison Wenifall hotel and a block east from the Ocean Beach Fountain and the Ocean Beach Ammu-Nation store. A seaside building with a helipad, which is retconned in Grand Theft Auto: Vice City Stories as being a place of residence for Lance Vance, is also a short walk to the southwest.

The safehouse is moderately costly, costing $7,000 to purchase as the safehouse comes with a garage for one vehicle. However, the garage also comes with an added perk, featuring a high clearance, which, unlike other safehouses with garages in Vice City Beach, is capable of allowing a Mule, Spand Express or Benson to enter. Upon purchase, the apartment becomes a save point for the player to save games. Like most other safehouses, the Ocean Heights Apartment has no interior.

Retrieved from ‘https://www.grandtheftwiki.com/index.php?title=Ocean_Heights_Apartment&oldid=375116’
Categories:
Cookies help us deliver our services. By using our services, you agree to our use of cookies.