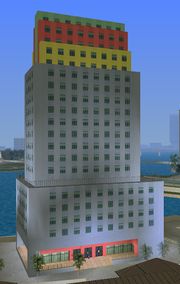 Available for purchase immediately after "In the beginning..." in GTA Vice City, the safehouse is presumably an apartment unit among many in the building. Because the safehouse has no garages to store vehicles, the safehouse is relatively cheap, selling at $3,000. Upon purchase, the apartment becomes a save point for the player to save games; the savehouse GTA Vice City also contains a hidden package at the back. Like most other safehouses, 1102 Washington Street has no interior.

The building situated directly across Hotel Harrison, which houses K. Rosenberg & Co., the legal offices of Forelli Family lawyer Ken Rosenberg, where early missions from Ken are available in GTA Vice City; the safehouse is also a short walk away from the Washington Mall (or a vacant site in GTA Vice City Stories) and Ocean View Hospital.

The building is virtually unchanged in GTA Vice City Stories, but is not interactive in any way.

Retrieved from ‘https://www.grandtheftwiki.com/index.php?title=1102_Washington_Street&oldid=364503’
Categories:
Cookies help us deliver our services. By using our services, you agree to our use of cookies.