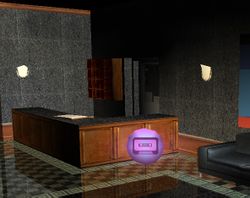 The cassette Save Point icon in the Ocean View hotel in Grand Theft Auto: Vice City

Save points are locations where the player goes to save their progress in a Grand Theft Auto game. Because the player cannot save the game by simply accessing the game's menu, the use of save points is required for this purpose.

The physical locations and accessibility of save points vary throughout the games. The concept of save points was first explored in Grand Theft Auto 2, where the player is offered the option to enter a "church" (hilariously marked by a JESUS SAVES sign) in each of Anywhere City's three districts. When in the church, the player must have at least $50,000 in hand to donate to the church and have their "soul saved", otherwise, the player will be turned away until they have $50,000.

Save icons, which were first introduced in GTA Vice City, are floating icons which the player must walk onto, to save the game, allowing save points to be placed indoors or outdoors. The icons were originally modeled after many other pickup icons in GTA III and GTA Vice City, depicted floating and spinning as a result. They vary in appearance between games, and are reminiscent of the media used in time period in which the game is set:

GTA Vice City Stories is the latest game to adopt the save icon, as beds in safehouses effectively replace the icon in GTA IV.

Grand Theft Auto V is the first game in the series to introduce the ability to save anywhere at any time off-mission with the "Quick Save" feature on the Mobile Phone, presumably due to the limited number of safehouses and the large map of San Andreas.

From GTA Vice City onwards, safehouses offer a change of clothing in addition to the save icon; in GTA San Andreas, GTA Liberty City Stories, GTA Vice City Stories and GTA IV, safehouses offer a full wardrobe in which to change the protagonist's clothing. GTA IV also employs an auto-save feature after the player has passed certain missions or performed certain activities. Saving the game from GTA III and onwards advances the time by 6 hours.

Retrieved from ‘https://www.grandtheftwiki.com/index.php?title=Save_Points&oldid=418190’
Categories:
Cookies help us deliver our services. By using our services, you agree to our use of cookies.