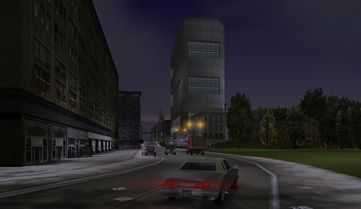 Portland View in GTA III, as seen to the north.

Portland View is a mixed-used district that houses the island's civic services, as well as residential and commercial establishments and greenery. Portland's LCPD police station and hospital, Sweeney General Hospital, are both located in the center of the district, wedged between commercial and residential buildings to the west, and an undeveloped, hilly plain and a supermarket to the east (Supasave in GTA III, and Fidl in GTA Liberty City Stories). A disused tunnel leading to Harwood is situated behind the supermarket.

In 1998, the setting of GTA Liberty City Stories, Mickey Hamfists resides in the district.

Retrieved from ‘https://www.grandtheftwiki.com/index.php?title=Portland_View&oldid=319681’
Category:
Cookies help us deliver our services. By using our services, you agree to our use of cookies.