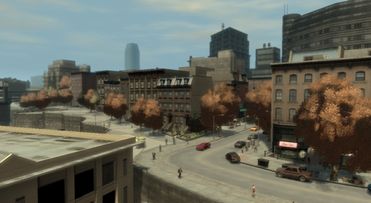 Rotterdam Hill partially fronts BOABO with a tree-lined promenade, suggestively converted from a road, presumably Brunner Street or Asparagus Avenue, which presently connects to both ends of the promenade.

Rotterdam Hill is a small, trendy upscale neighborhood located in central Broker, Liberty City. It is bordered to the north and to the west by Brunner Street (BOABO); to the southwest by Mohanet Avenue and to the south by Chive Street (East Hook); and to the east by Mohawk Avenue and Oneida Avenue (Downtown and Outlook, respectively).

Located on an elevated plot of land behind a massive retention wall on the eastern fringe of BOABO, Rotterdam Hill gives off a very quaint atmosphere with elements of trendiness. Its (few) streets are lined with well-maintained brownstones and are very quiet, compared to the busy roads just a few blocks to the east in Downtown.

People and places of interest

A fire department is located north of the junction of Onion Street, Mohawk Avenue, and Munsee Avenue, at the neighborhood's border with Downtown.

Rotterdam Hill appears to be mainly derived from Brooklyn's Clinton Hill neighborhood in size (Clinton Hill is also a relatively small neighborhood), name (both reference a topographic peak), and character (trendy neighborhoods, many brownstones). However, it also may have been influenced by Brooklyn Heights as well, specifically in reference to Rotterdam Hill's promenade, located along the northwest corner of the neighborhood (above the Brunner Street Tunnel). The promenade, situated along the edge of the bluff separating western Broker from the rest of the borough, offers great, unobstructed views of the Algonquin skyline to the west and is a popular destination for local residents.

Retrieved from ‘https://www.grandtheftwiki.com/index.php?title=Rotterdam_Hill&oldid=355743’
Category:
Cookies help us deliver our services. By using our services, you agree to our use of cookies.