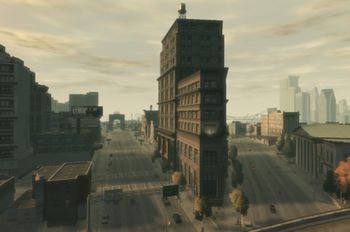 Downtown Broker as seen to the south.

Downtown Broker, often referred to by its official name, which is simply Downtown, is a neighborhood in central Broker, Liberty City. It is bordered to the north by Brunner Street (Cerveza Heights), to the west by Mohawk Avenue (Rotterdam Hill), to the south by Earp Street (Outlook), and to the east by Montauk Avenue (Schottler).

As its name implies, it is the downtown area of Broker; as such, it is the civic and commercial center of the borough. It is the fourth most important commercial center in the Metropolitan Area, following Downtown Algonquin, Downtown, Alderney City and Midtown Algonquin. Downtown is a very bustling and lively neighborhood, seeing a great amount of pedestrian and traffic flow. Many chain stores and businesses can be found in the area; for example, the LTA Headquarters building is located in this neighbourhood. The main commercial strip is Montauk Avenue, whereas Munsee Avenue is home to the offices of many public authorities and corporations. The average height of buildings in the neighborhood is much taller than in other areas around Broker.

Downtown is not served by the Liberty City Subway. The closest subway stations to the neighborhood are Schottler in nearby South Slopes and Huntington Street in Cerveza Heights.

The Broker Bus Depot is located in the neighborhood, acting as a major terminus in Liberty City for bus transport. Whilst the player is able to steal and drive the buses parked at the depot; buses aren't able to be used as a form of public transportation.

Retrieved from ‘https://www.grandtheftwiki.com/index.php?title=Downtown_Broker&oldid=355718’
Category:
Cookies help us deliver our services. By using our services, you agree to our use of cookies.