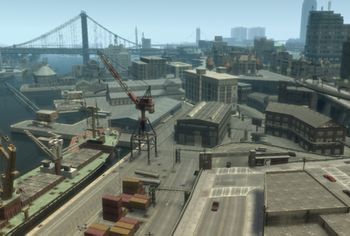 East Hook, as viewed to the north. The Platypus is seen to the left, while portions of south BOABO and Rotterdam Hill are visible in the background.

East Hook is a primarily industrial neighborhood and serves as the docking area in western Broker, in the Grand Theft Auto IV rendition of Liberty City. The neighborhood is bordered to the northeast by Mohanet Ave (Rotterdam Hill); to the north by Chicory Street (BOABO); to the west by the Humboldt River; to the south by Cisco Street and to the southeast by Delaware Avenue (Hove Beach); and to the east by Oneida Avenue (Outlook).

East Hook serves as the starting point of the player in GTA IV, after Niko Bellic disembarks from the Platypus in East Hook and is welcomed by Roman Bellic. Brucie Kibbutz's chop shop is also situated in north East Hook at Mohanet Avenue, while the Platypus may be used once again in the mission "A Dish Served Cold".

The neighborhoods and areas of western Broker (i.e. BOABO, East Hook, and Hove Beach west from Iroquois Avenue) lie at sea level along the eastern bank of the Humboldt River - which happens to be at the foot of a rise in the topography of the land east of the riverbank. For this reason, these areas are physically separated from the rest of the borough. As such, western Broker neighborhoods have developed similar aesthetic values and characteristics with each other that are, at the same time, completely distinct from other neighborhoods in Broker. Each area primarily consists of warehouses, docking facilities, and other such industrial structures.

East Hook appears to be undergoing gentrification, with a few of its larger properties being converted for residential and commercial use. However, the effect of gentrification in the neighborhood is minor compared to BOABO, its neighbor to the north, which has seen a much greater deal of its industrial properties turned into lofts and other living spaces.

East Hook is based on Brooklyn's East River waterfront Red Hook neighborhood. However, elements of the Brooklyn Navy Yard are also incorporated into East Hook: The Broker Navy Yard, located in western East Hook, is marked on the map provided with GTA IV, while the entrance into East Hook from the northern end of Delaware Avenue includes the "Broker Navy Yard" name; rusting cranes in the vicinity also allude to the many disused cranes in the Brooklyn Navy Yard.

The Liberty City Subway does not serve East Hook. The closest subway stations are Hove Beach in the eponymous neighborhood and Schottler in South Slopes; however, these stations are quite a distance away from the neighborhood. Furthermore, the physical location of the area (relative to the rest of Broker) also makes transportation access much more difficult: with the steep bluff almost completely cutting off the neighborhood from the other parts of the borough, (save for two short streets that run into Hove Beach: Oakley and Cisco Streets), it's a very arduous journey to either station.

Retrieved from ‘https://www.grandtheftwiki.com/index.php?title=East_Hook&oldid=375748’
Categories:
Cookies help us deliver our services. By using our services, you agree to our use of cookies.