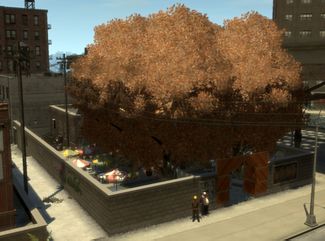 Slug 'em and toss 'em at this classic Irish drinking spot where darts are available for anyone who can still walk straight. Head to the Steinway Beer Garden if you think you're hard enough. - Grand Theft Auto IV manual description.

The Steinway Beer Garden is essentially a combination of an Irish pub, and a beer garden, an open air drinking venue which trace its origins to Germany. Indeed, the Steinway Beer Garden compound comprises a permanent single-storey public house as well as a shady open air space furnished with seats and tables, although there is actually little use of the exterior seating in-game. The interior of the public house in GTA IV is closer to resembling a classic Irish drinking pub, being identical to the interior of Lucky Winkles in Purgatory, Algonquin (down to the portrait of Derrick McReary). Advertisements for various alcoholic beverages, in particular Blarneys Stout, adorn the garden's outer walls.