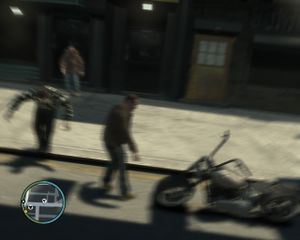 Drinking in GTA IV will usually results in both the player and his accompanying friend leaving drunk, staggering and tripping over. The effects of the activity is made worse with the camera swaying about (worsen with motion blur enabled).

In GTA San Andreas, drinking is counted as part of "eating" in dates, meaning bars in San Andreas are clumped together with restaurants.

Each of the player's girlfriends has preferences towards bars, which are more of a low-end destination for a date; as a result, certain girlfriends will shun bars altogether. When entered along with a girlfriend, the player is treated with a cutscene of player character drinking in the bar with the girlfriend, the girlfriend's behavior dependent on whether she likes going to a bar or not.

Drinking can be done at any of these bars accessible by the protagonist and their girlfriends:

In GTA IV, the cost of drinking in a bar is between $50-$100, depending on the "class" of the bar. When visiting a bar with friends and girlfriends, a cutscene will show them going in the bar. Afterwards, both of them will appear outside the bar, drunk/intoxicated. Whoever the player gets drunk with will determine how severe the effect is and how long it lasts, for example, drinking with Roman Bellic or Patrick McReary will get Niko Bellic completely wasted, but drinking with a girlfriend will get him only partially drunk. When drunk, there is some unique conversation between the characters, who will sometimes reveal other aspects of their personality. Frequently, the conversation may become an argument and the player will tell the other person to be quiet. While drunk, the player will stumble and sometimes fall to the ground, the same as the person who is with him, potentially sustaining minor injuries in the process. He will also be unable to walk in a straight line, run, and jump, access his phone (unless in a vehicle) or draw a weapon or fight. Vision will also become blurry and the camera will move irregularly. The intoxication wears off after a while, and if another activity is done after drinking or after dropping off the other person at their house, the player will become sober again after about 10 seconds.

If the player gets into a vehicle while drunk, the player will remark that doing so is not a good idea (only Niko will say this, because when Johnny Klebitz gets on his bike, a short cutscene will follow, showing his friends saying they had a good time and driving off, and then Johnny's intoxication will wear off soon). Driving while drunk also becomes difficult because the player will not be able to see clearly and control the vehicle properly. When driving under the influence, the car moves towards the nearest solid object; if there is a car 5 feet in front of you and a tree three feet from you you will hit the tree and then ricochet into the car. If the player is driving while intoxicated and the police see him he will get a one star wanted level.

Alternatively, the player can opt to take a taxi ride while drunk, avoiding the trouble of drunk driving and the penalties that come by doing so in front of police presence. The player character will confusingly call for a taxi using lines unique to only the moment the player is drunk.

Drinking can be done at any of these bars accessible by the protagonist and their friends: 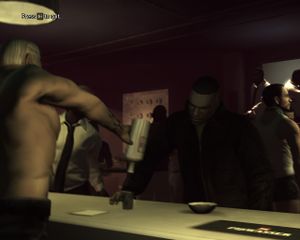 The player taking successive shots at Hercules in The Ballad of Gay Tony, becoming increasingly drunk.

In The Ballad of Gay Tony, the player has the additional option to drink alone or with friends at a bar at either Hercules or Maisonette 9 for free.

While alone, Luis will become increasingly drunk as he drinks successive shots until he finally collapses in a heap and blacks out (it takes a total of 8 shots to do so). This leads to Luis randomly waking up somewhere around Liberty City, often in places that are either hard to get to or simply odd. Some locations include:

While on an outing with friends, Luis can only take one shot and will be instantaneously drunk.

Retrieved from ‘https://www.grandtheftwiki.com/index.php?title=Drinking&oldid=363690’
Categories:
Cookies help us deliver our services. By using our services, you agree to our use of cookies.