This article refers to maintaining major friendships in GTA IV. For the minor characters Niko meets in the street, see Random Characters 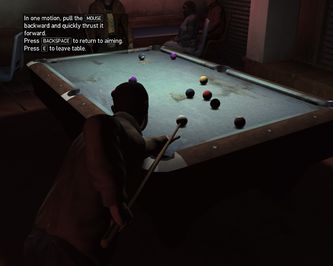 A game of Pool in progress in Grand Theft Auto IV.

In Grand Theft Auto IV, the player will eventually befriend several acquaintances over the course of the game's storyline, primarily after performing adequate number of missions for the contacts.

The player's friendship with a character is determined by a "[Character name] like" attribute found in game stats; the higher a friend's "like", the better their relationship with the player. Hanging out with friends is the primary method to improve on the player's relationships with their friends, eventually allowing the player to unlock special benefits; the player can also increase his friendships (as well as their "respect") through certain storyline missions. However, rejecting offers by friends to go out or ignoring friends for too long will eventually result in a friend's "like" towards the player dropping; players will be notified of the latter via a text message.

After setting an appointment, the player will have to head to their waiting friend, which will spawn in one of several possible points of the city (while some characters are constant in their pick-up locations - for example, Brucie seems to always be available at his home in East Hook - others may vary, such as Roman who one outing may be available from the South Bohan Safehouse but the next may be way down in Hove Beach); if the player does not pick their friend up for several hours, the friend will eventually become "bored" and cancel the meeting, reducing the friend's "like" towards the player. After picking up their friend, the player's is primarily instructed to head to the activity as agreed upon during the phone call, but can in fact make several stopovers on the way for other activities to boost the increase of the friend's "like" upon completion of the outing. Once the player complete the primary activity, the friend will ask the player to drop them off a specific location, at which point the friend's "like" will increase.

During the course of the outing, en route to the destination, and less frequently en route back to the friend's home, the friend will engage Niko in conversation with may or more not be relevant to the current state of the game.

The friendship feature is derided by certain commentators as a tedious and annoying aspect of GTA IV, as friends will consistently call the player on offers to go on outings, and there is no clear way of avoiding the activity without sacrificing their player's friendships. Even if the player chooses not to go on any outings, friends will still call the player regardless, even if the player sets their phone into silent mode (which is intended to block incoming calls). However, there is a simple method of avoiding going on outings without penalty; this is achieved by initially accepting a friend's offer to go out, and selecting the "Cancel Plans" option after the call.

There is a total of five available friends in GTA IV, two of which may be killed over the course of GTA IV's storyline:

It should be noted the gap between the completion of the mission and the point which a friendship is established may last several days.

There are a total of ten activities that can be performed in an outing, including

Only certain activities are available to each friend, and even then so friend may express preferences towards a certain type of establishment to go to:

Like girlfriends in GTA San Andreas, friends provide special benefits if their "like" percentage reaches 75% (they will call you to offer their particular ability). You can lose these benefits if their "like" percentage fall below 75%; when you raise the level again, you will get a text message. This will also have effect on the voicemail your friend leaves when he/she is absent.

Note: Sometimes a friend's benefit will not be available, due to excessive use or being blocked during certain missions.

Retrieved from ‘https://www.grandtheftwiki.com/index.php?title=Friendships_in_GTA_IV&oldid=368469’
Categories:
Cookies help us deliver our services. By using our services, you agree to our use of cookies.