The July 2001 issue of the online version of the fictional Liberty Tree newspaper (Vol. 1, Issue 6) was released on July 1, 2001. It is the six in a series of Liberty Tree issues to be released to promote Grand Theft Auto III.

The July issue is prominently touted as a "Mafia Special" primarily centered about the Liberty City-based Leone and Forelli crime families, with four out of its six articles devoted to the topic. The issue is given a teal color scheme with "Fertilizing The Truth By Natural Means!" as its present motto.

Turf Wars and Triads Lead to Power Vacuum at the Top

Police and organized crime experts are concerned that the Mafia may be losing their grip in Liberty City! Strange as it may sound, the police believe that the apparent problems within the major crime families in Liberty City may make the city less safe for law-abiding citizens. The Mafia has long dominated all aspects of illegal activity in Liberty City, but recently, internal problems including, police believe, a power struggle between the Leone family and the Forelli family, along with the emergence of other criminal gangs in Liberty have destabilized the city. "What we had before was bad," said an unnamed source, "But what we've got now could be much worse. With the Mafia you knew what you got. Now, who the hell knows what's going to happen in this place."

The police also believe the Mafia are involved in a vicious turf war with Triad gangsters for control of the lucrative Chinatown area of Liberty City. What this means for law-abiding citizens is simple: even more acts of violence and threats to public safety, something none of us want. While we all want to see organized criminals, racketeers and bullies behind bars, we don't want to get hurt in the process. 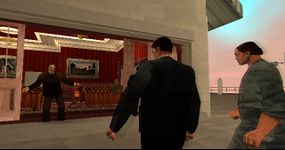 That chip off the old block returns home.

Joey Leone presents a humble exterior to the world. "I'm just a car guy!" He says, before launching into a string of expletives and throwing our reporter off his property. Joey Leone is a car guy. But he is also a mob guy and chief-in-waiting to the Leone crime family. Joey Leone's father, Salvatore Leone has long been suspected as a lynch pin in the city's organized crime scene. Now his son is coming under increased scrutiny. 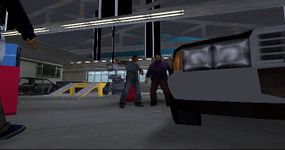 Joey's Garage preparing for a bit of "customer service".

A police spokesman said, "We know Joey Leone ain't all he makes himself out to be, which ain't much. I mean here is a guy who presents a certain view to the world; an idiot, a mechanic who likes sleeping with hookers and bullies people. This ain't the real Joey Leone." This apparently easygoing whore-mongering grease monkey is thought to be a key cog in the Mafia wheel. But which cog, and which wheel "that we don't know yet. But we know one thing, Joey Leone is up to no good and we want to find out what," say the police. So, Mr. Leone, if you're out there reading this, if you can read, time to realize your time in the spot light is now.

Toni shows that Momma's really is the ideal place for some quiet conversation.

Toni Cipriani, heir to Liberty City's best-known Italian empire, Momma's Restaurant, the famed St. Mark's eatery where the great and the not-so-great get their meatballs, has long been known as a man with a temper. Years ago, he broke a diner's arm for suggesting the ziti was over-baked and he's been known to tenderize the face of customers who say his veal is too tough. This was all seen as part of the charm. While his mother slaved away in the kitchen, producing masterpiece after masterpiece, Toni was the front-of-house guy with not that much upstairs. A bad temper and a heart of gold. Or so the papers told us. But not any more. 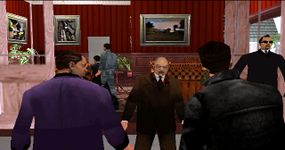 A glimpse of the tomato sauce trade... in action.

Toni is under police investigation for his association with the Leone family, for who is he believed to have carried any number of contract hits over the past few years. His exact relationship with Salvatore Leone remains unclear, "I buy tomato sauce off him, that's it," said Mr. Cipriani when asked, but federal investigators think there may be more than meets the eye to the psycho in the kitchen from St. Marks.

Luigi Goterelli: "I'm a Night Club Owner, Not a Pimp!" 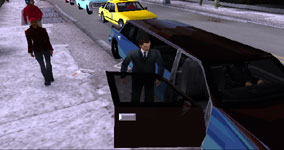 Luigi Goterelli seen with the luxury that smut affords him.

Luigi Goterelli, owner of the notorious Sex Club Seven, has pleaded "not guilty" in his trial for running premises for immoral purposes and for pandering women for profit. His lawyer said, "My client works in entertainment. He is not a pimp. He works in adult entertainment. And yes, it's a little risqué, and yes, the women take their clothes off, but this place ain't a brothel. Have you ever been to a brothel? It don't look like Mr. Goterelli's place. Nothing at all like it, I can tell you. Sure, he sells sex, but nothing happens and the girls are all professionals, dancers, that is. Look, I'm a married man!"

Mr. Goterelli was rumored to be changing his legal representation.

Killer Bees: Not a Threat In Liberty City!

Radio shows have been inundated with calls asking about the presence of killer bees in Liberty City. There is absolutely no basis of truth for this rumor and experts are puzzled as to why or how this rumor has started.

This is not the first time Liberty City has been subject to falsehood and lies. A few months ago, people were claiming the whole city had been shrouded in a mysterious fog, but that was not the case. Before that, people seemed to think the city was being attacked by a giant lizard and before that, there was a rumor circulating that some people in Liberty City didn't actually bleed! Well, we're here to tell you once and for all: no killer bees, no dense fog, no giant lizards and no bloodless zombies!

This is Liberty City, people. We all like a crazy story (especially here at the Liberty Tree!) but at least keep it vaguely in the realms of possibility! An expert notes, "Killer bees could never survive in latitudes this far north. Whether they exist or not, I don't know, I'm an expert in tree frogs of Venezuela, but I do know that there are no killer bees in Liberty City"

Summer is well and truly upon us, my darlings, and in summer, a young man's thoughts turn to Bangkok, and the delights of the Pat Pong district.

If, however, you are stuck in this un-sophisticated backwater, then it must turn to opera. Not Bayreuth and not Glyndebourne, but not half bad, I can promise you. This season's offerings are nothing short of magnificent. If you like power, there's the untimely aggression of Wagner! If you like the common touch, there's Mozart, and if you like a little Italian, there's Puccini in the park. (Puccini was in fact a very little Italian. New archeological research reveals he was 3 foot 2. But what a man. A marvel. Magnificent. Maestro... please!) And if you like philistine pursuits, there's a revival of Cats! It gave me kittens. When will these people learn! Culture, please! Pour moi!

Retrieved from ‘https://www.grandtheftwiki.com/index.php?title=Liberty_Tree_Articles_in_GTA_III/July_2001&oldid=338141#Toni_Cipriani:_Loves_His_Momma.27s_Sauce’
Category:
Cookies help us deliver our services. By using our services, you agree to our use of cookies.