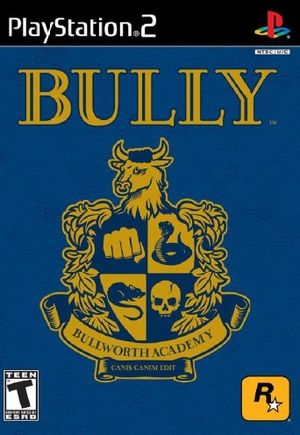 Bully, also known as Canis Canem Edit, is a third person action-adventure video game released by Rockstar Vancouver for the PlayStation 2. The game was released as Bully: Scholarship Edition for the Xbox 360, Wii and PC. Bully: Scholarship Edition was released by Rockstar Vancouver, with Mad Doc Software (now known as Rockstar New England), involved with the development. The game uses an advanced Grand Theft Auto: San Andreas engine through Renderware.

Similarly to the Manhunt series, it is possible that Bully takes place in the same "universe" as the Grand Theft Auto games, based on a few small references in both Bully and Grand Theft Auto IV that link the two:

Retrieved from ‘https://www.grandtheftwiki.com/index.php?title=Bully&oldid=404724’
Category:
Cookies help us deliver our services. By using our services, you agree to our use of cookies.