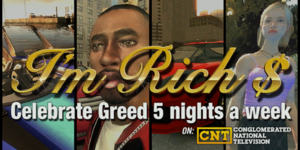 I'm Rich is a reality television show on CNT in Grand Theft Auto IV that parodies the lives of the super-rich, similar to that of the real life reality show The Fabulous Life of....

Focusing on the socialites and "cokehead debutantes" of Liberty City, they often talk about some of the outrageous spending of these people, for example, Tony McTony's collection of 15 Infernus sports cars all with the Tony McTony logo and Cloe Parker's real estate (includes a mega mansion in Westdyke, Alderney that her father bought for her on the day of her first period) and her ruby filled breast implants. I'm Rich also features Jill Von Crastenburg, Samantha Muldoon, Lyle Cleethorpes and Alfonso Vasquez including his ex-wife and his daughter January Natasha Vasquez. 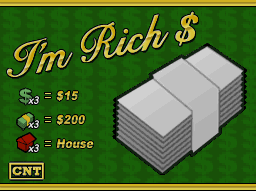 During the show, locations of Liberty City and San Andreas are often shown, including: 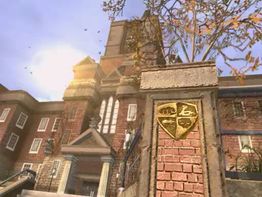 The entrance of Bullworth Academy as shown in I'm Rich.
Retrieved from ‘https://www.grandtheftwiki.com/index.php?title=I%27m_Rich&oldid=365640’
Category:
Cookies help us deliver our services. By using our services, you agree to our use of cookies.